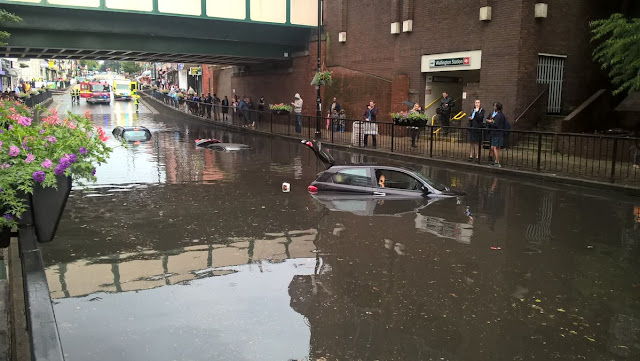 
The annual flood season arrives right on time for the fifth year in a row in the UK!
What was once considered a once in ten year event parts of the UK have been submerged under flood water in November for the fifth year in a row.
The heavy rain that followed Storm Angus caused flooding in parts of the England and Wales on Monday 21 November and early Tuesday, 22 November.
Homes have been damaged and rail and road transport severely disrupted. Police in South Wales fear a missing man been swept away by flood water. The storm has also brought strong winds, with gusts of up to 70mph recorded on the Isle of Wight.
Parts of the South West of England and South Wales had already seen some flooding from Storm Angus on Sunday 20 November. Evacuations were carried out in South Molton in North Devon, and Maesteg in Wales.
Elsewhere in Greater Manchester, Yorkshire, the South West, East Midlands and Wales all suffered severe flooding with more on the way.


Some areas had seven times the November average of rain in 24 hours. In the Cumbria 20,000 homes were without power last night, meanwhile in Scotland one of the reactors at Torness nuclear power station has been taken off line due to a build-up of seaweed around a cooling water inlet. The issue was discovered at around 8.45am on Tuesday in reactor one at the facility, near Dunbar in East Lothian. A spokeswoman for EDF Energy said there had been "quite stormy conditions" in the area overnight, but she described the closure as "unusual".