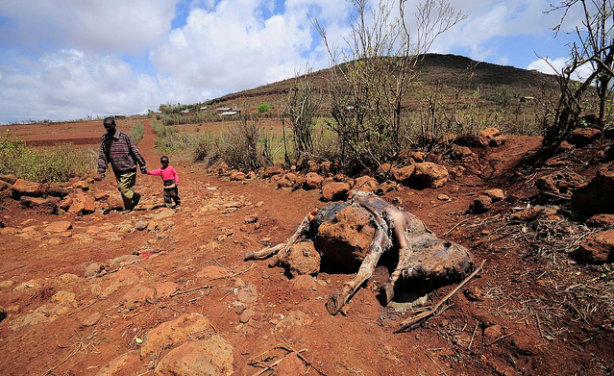 Photo Hidropolitik Akademi
Nearly 850,000 people in drought-hit southern Madagascar are experiencing "alarming" levels of hunger, and more aid is needed to prevent a dire situation from becoming a "catastrophe", UN agencies said on Thursday.
This is the latest warning by the agencies who have been scaling up their response to a crisis affecting more than half the population in the south of the island nation.
Some 20% of households in the affected areas are now experiencing emergency levels of hunger, according to the latest food survey.
"Emergency" is phase four of a five-point scale used by food agencies, where five is famine.
Chris Nikoi, regional director of the World Food Programme, said: "What I saw in the south of Madagascar earlier this month alarmed me."
"These are people living on the very brink.
Many have nothing but wild fruits to eat.
We must act together now to save lives," he said in a statement.
Health in Madagascar takes turn for the worse as $22m hospital abandoned.
Many households have resorted to begging, selling their land or possessions, and eating vital seed stocks in order to survive, the UN agencies said.
Food stocks from the last harvest ran out in August and the next harvest is not due until March.
As well as food aid for all those affected, farmers need drought-tolerant seeds and tools to prepare for the next planting season in November/December.
"The cost of inaction or further delaying our response is too ghastly to contemplate," said David Phiri, subregional coordinator for Southern Africa at the UN Food and Agriculture Organization.
"If we do not step up our efforts now, this long hunger period will be extended by yet another year. This would be a catastrophe for a people who already appear to have virtually no food, no seeds and no discernible income," he added. Some 90% of Madagascar's population lives on less than $2 a day, and almost half of children are chronically malnourished or stunted - which results in them being short for their age - the agencies said.
Many children in the south have been taken out of school to look for work, food, wood and water during the crisis.
"We can and must do better for these children," said Leila Gharagozloo-Pakkala, regional director for eastern and southern Africa at the UN children's agency Unicef.