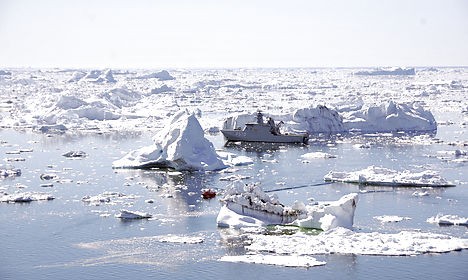 Photo www.thelocal.dk
Temperature records were broken in Greenland this year after parts of the territory's vast ice sheet began melting unusually early, the Danish Meteorological Institute (DMI) said on Tuesday.
"These new results give us new and robust evidence of the tendency of warmer temperatures in the Arctic continuing," John Cappelen, a climatologist at the institute, said in a statement.
The average summer temperature was 8.2C (46,76F) in Tasiilaq on Greenland's southeast coast, the highest since records began in 1895 and 2.3C (36.14F) above the average between 1981 and 2010. New highs were also recorded in the south and in the northeast this summer, after a balmy spring that broke records at six out of 14 weather stations in the territory.
In April, DMI said that the seasonal melting of Greenland's vast ice sheet had reached record levels, prompting it to check that its "models were still working properly".
Around 12% of the ice sheet was found to be melting almost one month earlier than the previous top three dates for when more than 10% of the ice had begun to melt, it said.
The Greenland ice sheet, a potentially massive contributor to rising sea levels, lost mass twice as fast between 2003 and 2010 as during the entire 20th century, researchers said in December.

it seems that you have had a lot of research and work on it. Can you please advice any station and instrument to measure wind speed? Actually I live in city where foggy weathers and snow makes our living a bit risky.So we really need that to be safe.