A Letter From Hawkeye! "IF you still have doubts that geoengineering of earth's climate is being used globally then this post will remove all doubts." GEOENGINEERING: PARTS I, II, AND III HEARING BEFORE THE COMMITTEE ON SCIENCE AND TECHNOLOGY HOUSE OF REPRESENTATIVES ONE HUNDRED ELEVENTH CONGRESS 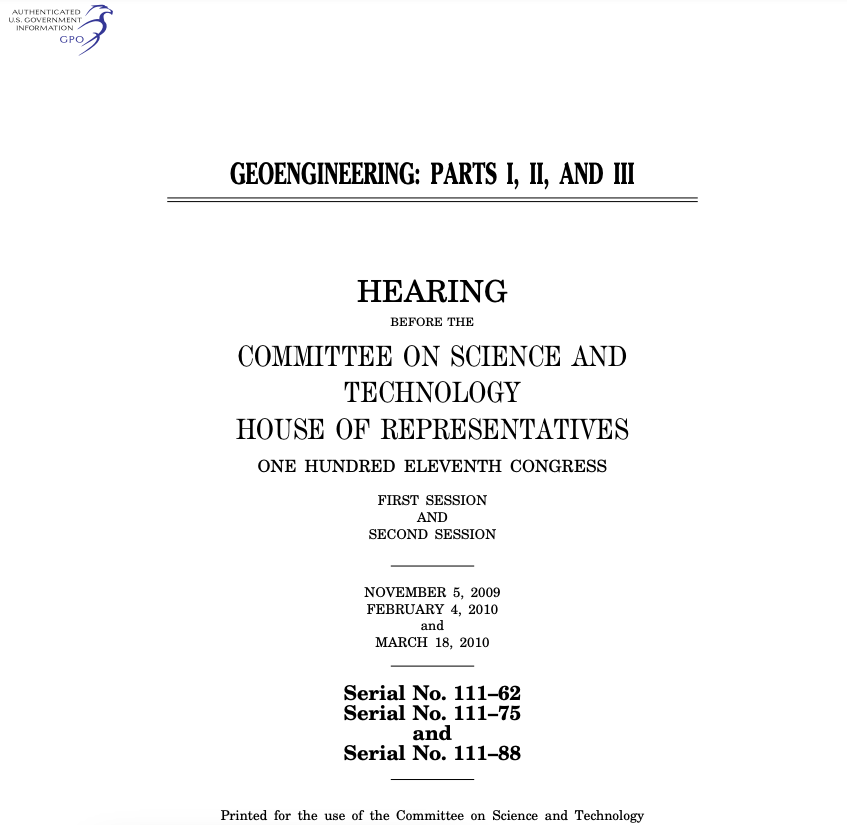 "IF you still have doubts that geoengineering of earth's climate (weather) is being used globally then this link will remove those doubts."
https://www.govinfo.gov/content/pkg/CHRG-111hhrg53007.htm
**note: The link is DOT "GOV"
Greetings to all here at TBW! Hope everyone is doing well.
The information I am about to share with you all is from the link provided above by the U.S. government that I found in a simple Google Search it is a must read....must look published paper that took place in 2009/2010, a hearing charter committee on Science and Technology  in the U.S. House of Representatives, Thursday, November 5, 2009, @10 a.m. - 2318 Rayburn House Office Building, titled: "Geoengineering: Assessing the Implications of Large-Scale Climate Intervention"
[House Hearing, 111 Congress]
[From the U.S. Government Publishing Office]
Hearing before the Committee on Science and Technology House of Representatives- First Session and Second Session November 5, 2009/February 4, 2010/and March 18, 2010
The Honorable Bart Gordon, Tennessee chair
*The committee consisted of Representatives from the following states:

*Also included states for a subcommittee on Energy and Environment:

Illinois,  Texas, California,  S.Carolina, Michigan,  Maryland,  Florida,  Missouri,  and 8 staff members of which 7 were democrats and one was a republican. Honorable Brian Baird, Washington chair

*The three topics for discussion according to the three dates scheduled were:

The Scientific Basis and Engineering Challenges (2/4/10)

*before I go any further, I would like to tell you why I found this paper in a simple Google Search. I was reading the newest post on geoengineering watch website, 1/21/23 #389, that mentioned 'Mexico is banning geoengineering'. I was curious to see which news outlets put that news out so I googled, 'Mexico bans geoengineering'.  That's all I typed in the search bar and I got several pages of this news title reported by quite a few different media outlets....surprise! The big surprise was finding this link offered by dot gov! Titled: Geoengineering: Parts I, II, And III.
It was the only link that differed from all others as all others were media websites. So I opened it and wow. See that?! It is very public knowledge but I guess no one bothers to look for it. Ahhh, our Lord's words instantly come to mind....' seek and you shall find'!!! He never lies to us!
OK, here is more from that link...
The entire hearing is published, so it is extremely lengthy, but please look and read as much as you can. You will see so many things I have written about here on TBW, including my certainty of steering hurricanes and my recent personal experience of such. You will see also how many people, experts, departments, meteorologists,  statesmen, etc., etc., are well in the know of this technology BUT, the entire hearing is implying it has not yet been deployed on a daily scheduled basis yet...BUT, admits by witnesses and experts testify that it has been used and that 23 countries are engaging in weather modification since 2003... BUT, also has testimony geoengineering has been in the making since 1962 and under JFK's number 1 science advisor 'expert'! (Still the "spin talk" even in government court hearings!) Ugh!!....
From the hearing...
Purpose:

On Thursday, 11/5/09, the House Committee on Science and Technology will hold a hearing entitled "Geoengineering:Assessing the Implications of Large-Scale Climate Intervention". Geoengineering can be described as the deliberate large-scale modification of the earth's climate systems for the purpose of counteracting climate change. Geoengineering is a controversial issue because of the high degree of uncertainty over potential environmental, economic, and societal impacts, and the assertion that research and deployment of geoengineering diverts attention and resources from the efforts to reduce greenhouse gas emissions. (Isn't that exactly what we are seeing in politics!?) The purpose of this hearing is to provide an introduction to the concept of geoengineering, including the science and engineering underlying various proposals, potential environmental risks and benefits, associated domestic and international Governance issues, research and development needs, and economic rationales both supporting and opposing the research and deployment of geoengineering activities.

(Cliff noting from readings in the hearing)... due to all that is involved with geoengineering the earth, climate experts and policymakers consider geoengineering activities to be a potential emergency tool. (If that is accurate, 'potential emergency', then we are in that climate emergency now and have been for years because it is a presence in our skies today and yesterday. Yes, I have written we are in climate collapse, that would be an emergency!) The UK's Royal Society, equivalent to U.S. National Academies National Research Council (NANRC), published the most significant report on geoengineering titled; Geoengineering the Climate: Science, Governance, and Uncertainty. They divided the methods into two categories, SRM (solar radiation management - reflecting a portion of solar radiation back into space, and Carbon Dioxide Removal (CDR).
However, there are numerous facets to this program including Chemical Ocean Fertilization to enhance specific natural chemical processes which consume carbon, i.e.- phytoplankton. SRM is also referred to as Sunlight Management in this hearing.
Human-engineered weather modification since 2003 and the dates of these hearings the NANRC published 4 reports on it and stated that 23 countries are engaging in weather modification on a large scale, and China is the nation most aggressively pursuing it with an annual budget of $40 million dollars for hail suppression and precipitation enhancement - with no proof of the efficacy. No consensus on the cause and effect! (BUT IT STILL CONTINUES TO BE PRACTICED (used)). Sound familiar...?
*Practiced? Notice the specific words used throughout this hearings discussions. It should remind you of everything else in this world of malice? Well that word, practice, means to try to be something, to practice is to see what happens, to perform a certain task regularly in order to improve and or learning outcomes. Every doctor practices medicine, that's why their businesses are called practices, so then if they are practising then they are NOT experts, and patients are experiments. Just making a point folks!
Everything I read in this hearing published I already knew of through lots of years of research, my eyes, and listening to the true teachings by Dane on his geoengineering watch website.
There is discussion in this hearing also of the potential of geoengineering becoming warfare and how climate control could lend itself to unprecedented destruction of the environment, societal life, and of course politics! Yes on all of those! It is not "could be"... it IS be! I am a witness to that. Other potential problems said at this hearing are drought, monsoons, ozone layer depletion, whitening skies, reduction in efficiency of solar power, and rebound warming from long-term SRM deployment (usage). Yes, yes, yes! All happening and visible. Polar vortex cold snaps quickly become rebound warming every time. That means yes, SRM/geoengineering has been happening LONG TERM, not a potential problem ... an actual problem. Minus 50+ degree temperatures are just not normal because they are just not natural.
The quagmire is that the climate change crisis is made more urgent by the rapid pace of progress ... technology, and we are in a progress trap that has passed the point of returning to any kind of normal or wellness factor. Sad but true.  It's just like their medical health management. It's health management, not healthcare or cures. There are no cures only meds creating more sicknesses, so what is it all about then? Business. Business as usual only cares about money and not life.
Where is big business? In our government, writing our laws, deleting truth, growing our food! Even food was spoken about at this hearing. It stated that food crops could be genetically modified too in order to reflect sunlight! GMO food is also part of geoengineering. Now, if GMO plants are reflecting the sun to help SRM practices, then is aluminium deliberately put in plant DNA? Is the veil lifting for you reading this yet?!
Who is big business? Presidents, pharmaceutical,  agriculture,  banking, technology, .... almost everything is big business now, beware! Stop buying their poisonous products!
Do the Google search for this yourself, please! Pay attention to words used by the criminals running our politics. They love to hide stuff in plain sight and lie it is not there. Know this truth so you can help yourself, your loved ones and the life support system that is our environment.
Thank you!
Hawkeye
https://www.govinfo.gov/content/pkg/CHRG-111hhrg53007/html/CHRG-111hhrg53007.htm
https://newspunch.com/mexico-bans-chemtrails-and-geoengineering-after-rogue-startup-attempts-to-dim-the-sun/
https://www.geoengineeringwatch.org/geoengineering-watch-global-alert-news-january-21-2023-389/
Hawkeye's Page
Front Page