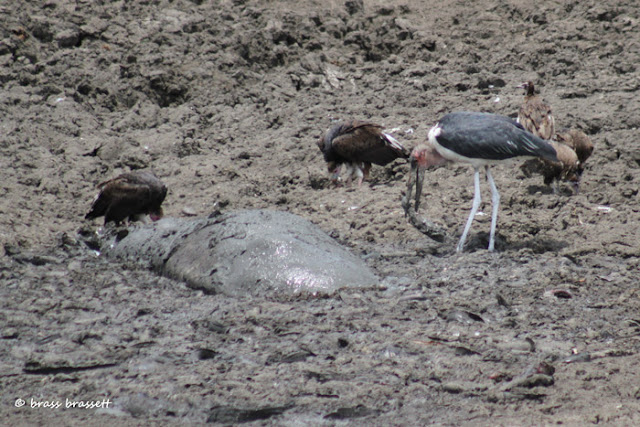 Photo africageographic.com
As South Africa contends with a severe drought, officials at Kruger National Park have put a plan into action that they say will help avert mass die-offs of wildlife-through the selective culling of some of the park's largest grazers.
This week, rangers began killing around 350 of the park's 7,500 hippos and 47,000 buffalo.
The populations of both species are at their highest ever, according to officials.
Reducing their numbers will not put either species at risk, rangers say, but will reduce some of the strain on the park's grasslands and water holes.
"The buffalo population is at higher densities than previous droughts, therefore it is expected that the population will incur huge losses during the current drought," Laura Mukwevho, communications officer at Kruger National Park, wrote in an email.
Officials say the kills will also help stave off mass animal deaths seen in Kruger during past droughts, such as a period in the early 1990s when consecutive low-rain years cut the number of both hippos and buffalo in half.
The meat harvested from the killings is to be distributed to disadvantaged, low-income communities on the border of the park.
The current drought is being called the country's worst in 35 years.
Water restrictions have gone into effect in major cities, and food shortages threaten millions of people.
Kruger officials said the removals would happen first in "sensitive areas" of the park, such as small natural pools where hippos are concentrating in unusually high densities and defecating in the water, making it unusable for other animals.
The cull is a turnabout from South African National Parks' position earlier in the year, when it described drought conditions as nature's way of regulating wildlife populations, and said it had no plans to intervene.
The park service stopped killing animals to control populations in 1994, partly because of public opposition to elephant culls at the time.
"This is not a 'sneaky reintroduction of culling by SANParks,' as put by some in their opinion," Mukwevho wrote, responding to wildlife advocates' condemnation of the hippo and buffalo culls.
"In view of the huge populations of these large herbivores and the mortalities we have already observed amongst buffalo and hippo this year, as well as the anticipated mortalities later in the year, these numbers to be removed are not significant at the population level."