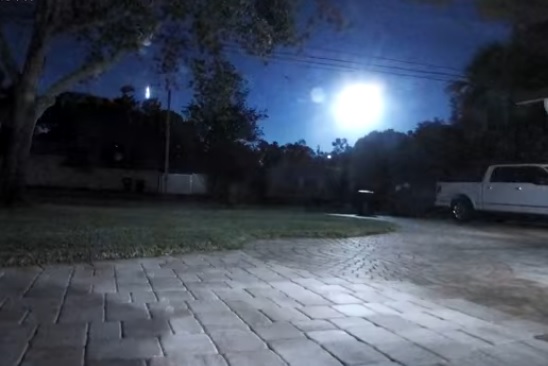 A fireball from a meteorite plummeted from above the Gulf of Mexico last night, creating a spectacular show for the Suncoast.
ABC7 meteorologist Josh Stone reports to have seen it around 11:20 last night and said it looked as bright as the sun.
Many views have been sharing their experiences of shaken windows, rattled doors and freaked out pets as it not only lit up the sky but created a rumble, too.
According to Bill Cooke of Marshall Space Flight Center, "The meteor began 46 miles above the Gulf of Mexico and 8 miles from Sarasota.
It then moved slightly north of west ...before disintegrating at an altitude of 15 miles".
Classified as a bolide but not a superbolide, the meteor caused no damage.
Approximately 100 sightings came into the American Meteor Society about the event.
The reports can be seen on their website.
Dr. Cooe from the Marshall Space Flight Center said it likely traveled 40,000 miles per hour and vaporized as it hit the atmosphere, lighting up the sky.

A huge sunspot, bigger than the Earth is turning to face us: Sunspot AR2585 is large but (so far) quiet
A monster coronal hole is facing Earth: Coronal holes thought to cause large quakes...Stay tuned

Our Sun eats a comet for breakfast!
Missile test, space junk or a meteor? Blazing spectacle spotted over Nevada, Utah and California
Our Sun releases it's strongest solar flare since September 2015: M-class 7.6
It could be a catastrophe! China's first space station, Tiangong-1, appears to be out of control
Expect large quakes in the coming days: A very large Coronal hole is now facing the Earth
Meteorite smashes through house roof in Province of Phitsanulok Thailand: Rocks recovered
at November 23, 2016