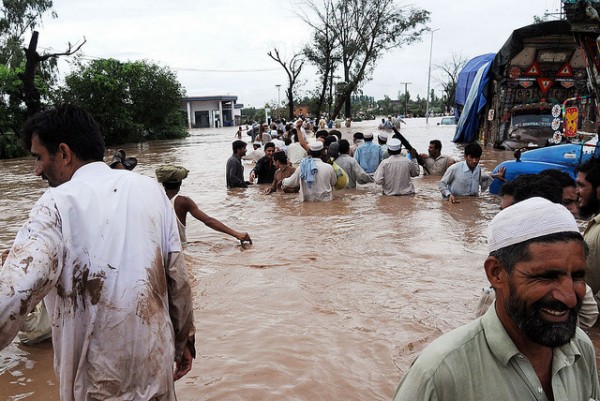 Photo floodlist.com
The death toll from a flash flood in in Pakistan's Khyber Pakhtunkhwa province rose to 43 on Sunday, with over 40 injured and scores of others missing, officials said.
The provincial National Disaster Management Authority (NDMA) said that Chitral district was the worst hit area where 31 people were killed, Xinhua news agency reported.
"The hill torrent washed away a mosque, a Pakistan army check post and nearby houses (35 full house damage, 47 partial house damage)," the NDMA said in a statement.
The torrential rain hit Ursoon village on Saturday night, which resulted in flash flood in the stream located near the Pakistan-Afghanistan border, the statement added.
Express News reported that eight security personnel were killed and four others seriously injured when flash flood swept away their check post in the district.
It added that 32 people were also injured in separate incidents of roof collapse.
Separately, in Haripur district, four people were killed and four others injured when the roof of their work site collapsed near Tarbela dam area, Latifur Rehman, spokesperson for the Provincial Disaster Management Authority (PDMA) said.
Rescue teams from Pakistani army, paramilitary forces and PDMA have launched a search and relief operation.
The Inter-Services Public Relations said in a statement that the troops have provided food, tents and medical aid to affected people in the Ursoon village.
An army helicopter has made five trips from Chitral to Ursoon and evacuated the injured, said the statement. A search operation for missing persons is ongoing.