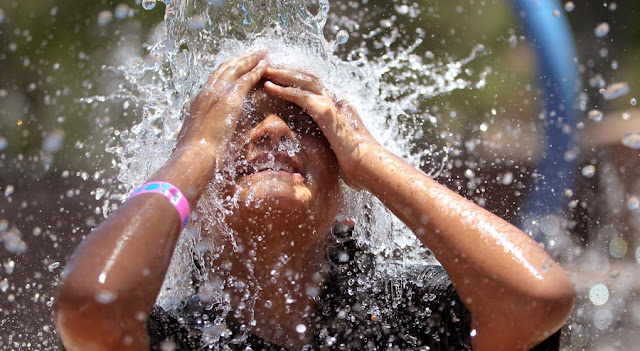 The swelter added to the challenges faced by firefighters laboring to extinguish a blaze that has charred about 2,000 open, brushy acres in the far southern reaches of the county since erupting near Potrero late Sunday morning.
Some coastal areas, though, were enjoying more temperate weather, such as the reasonably comfortable 76-degree climate at Lindbergh Field alongside San Diego Bay in the early afternoon. An excessive-heat warning for inland areas is set to remain in effect until 8 p.m. Wednesday.
A less severe heat advisory for the coast is scheduled to expire at 8 o'clock tonight.
Temperatures are expected to lower somewhat Tuesday, when high temperatures should fall to 84 to 94 degrees in the valleys, and on Wednesday, when they likely will range from 108 to 115 degrees in the lower deserts, 99 to 107 in the upper deserts and in the 80s or 90s in the mountains, according to forecasters.
Authorities advised the public to avoid potentially serious heat-related ailments by staying well-hydrated, avoiding unnecessary outdoor labor and checking on neighbors and relatives -- especially those with health conditions and who lack air conditioning.
Officials also warned against leaving children or pets in parked cars, which can quickly become death traps in high heat.
Residents are urged to conserve electricity as much as possible, especially during peak hours from 11 a.m. to 8 p.m.
This can be done by not using appliances such as washing machines, dryers and microwave ovens, and by turning off lights and computers when they're not needed.