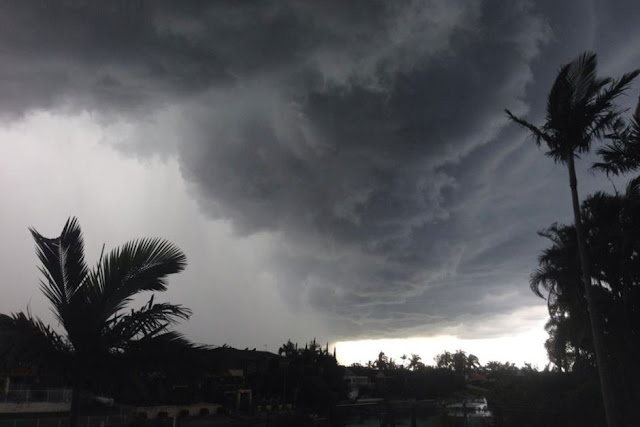 Photo www.abc.net.au
Just two weeks after waves up to 8 metres have hit Australia's east coast, crashing into beachfront properties and causing millions of dollar's worth of damage, the wild weather is back with a vengeance.
Heavy rain drenched central and southern Queensland and flooded roads in Brisbane on Sunday, as a major weather system barrelled south and intensified over New South Wales.
Emergency services are on standby, and said they had received around 300 calls for help across south-east Queensland.
Across the region there were more than 9,000 blackouts.
On the Sunshine Coast, residents said a tornado-like storm went through early in the evening, ripping a roof off a unit block and several homes in Akerginga Place at Mooloolaba.
Conditions have now eased from the Sunshine Coast to Brisbane, but the Bureau of Meteorology (BoM) warned of local flooding BoM had forecast widespread rainfall totals of between 50 and 80 millimetres, with isolated totals in excess of 100 millimetres.
Numerous locations stretching from Caboolture down to Jimboomba recorded up to 70mm of rain within an hour late on Sunday, which is almost the average amount for the whole month.
Murweh Shire Council Mayor Annie Liston, speaking from Charleville, said the rain in southern Queensland would be a help but was "not drought-breaking". Meanwhile further south, Rescue services in NSW were kept busy on Sunday night, following heavy rainfalls along the coast.
The State Emergency Service (SES) was involved in six successful rescues, and said the worst of the weather was moving towards the south coast.
The east coast low was expected to intensify around the coast at about midnight, when heavy rain was expected for up to six hours.
Flood warnings were issued for 13 areas across NSW, with the Illawarra and south coast region expected to be hit the hardest, and flash flooding already in Bexley and Kogarah in Sydney's south.