Photo abcnews.go.com
At least 14 people, including an eight-year-old boy and a toddler, have died in flooding in West Virginia, according to the state governor.
Heavy storms and flooding have caused widespread damage throughout the state, said Governor Earl Ray Tomblin reports the BBC.
A state of emergency was declared in 44 of the state's 55 counties.
Rescue efforts were under way for about 500 people trapped in a shopping centre while officials continued to search for others stranded in devastated areas.
The flooding has destroyed more than 100 homes and knocked out power for thousands in parts of the state.
14 people were killed, including a toddler, after powerful storms swamped West Virginia on Thursday night, cutting power and plunging hundreds of thousands of people into darkness.
The search for 4-year-old Edward McMillion ended in heartbreak after officials said Friday that they found his body.
The boy had vanished in the rising waters in Ravenswood, Jackson County, which sits along the Ohio River on the Ohio border. 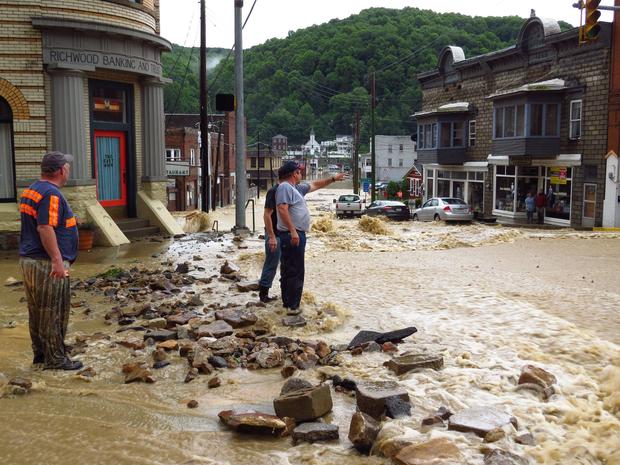 Photo www.cbsnews.com
Three other deaths occurred in Kanawha County, while a another death occurred in Ohio County in West Virginia's northern panhandle, the governor's office said.
Authorities in Greenbrier County announced Friday afternoon that two males were also found dead - bringing the death toll up to seven.
Officials did not immediately identify the victims, although local reports said one of those killed in Ohio County was an 8-year-old who had slipped into a creek and was carried away.
He later died at a hospital, The Intelligencer reported.
Meanwhile, an elderly man was killed in the floodwaters in Kanawha County, while a woman there was washed away in her vehicle in another incident, NBC affiliate WSAZ reported.
In one dramatic scene in White Sulphur Springs in the state's south, where up to 10 inches of rain fell Thursday, the flood waters pushed a burning home down the Howard Creek.
Forty-four counties, primarily in the southeastern part of the state, were under a state of emergency Thursday night because of flood waters, emergency officials said.
Electric utilities reported that almost 500,000 customers were without power.
"We surely need your prayers because there's a lot of people hurting right now," Jim Justice, owner of the luxury Greenbrier Resort, told The Weather Channel.
Kanawha County was especially inundated, and dozens of water rescues were under way in and around Clendenin, where numerous roads were closed by racing flood waters,
WSAZ said.
"There's been a ton of areas that have been hit hard" by as much as 7 inches of rain, said Danielle Banks, a meteorologist for The Weather Channel. Mark Burgess, wife Lisa and parents-in-law Bill and Peggy Lucas were occupying the second floor of their home in Elkview when the waters started rising at around 1:30 am ET.
Mark Burgess told NBC News on Friday morning there was about four feet of water, "but it has stopped going up now."
He said it was the first time that residents have witnessed such flooding.
"My mother-in-law has lived here for 80 years, and this never happened before," he said.
"There is nothing you can do," he added.
"We can call for help if it's too deep, but it's OK right now."

Another 51 people struck by lightning in Germany bringing total to over 100 this week in Europe
at June 24, 2016