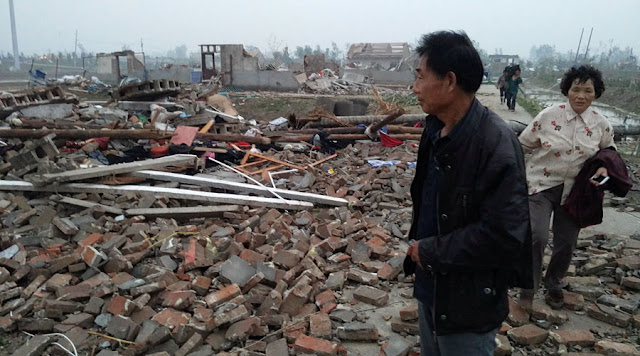 Photo www.rt.com
Nearly 500 of people were injured, 200 of them critically, the official Xinhua News Agency reported. Roads were blocked with trees, downed power lines and other debris, while heavy rain and the possibility of further hailstorms and even more tornados was complicating rescue efforts, state broadcaster CCTV reported.
The disaster has been declared a national-level emergency.
The storm struck at around 2:30 p.m. local time Thursday, the Associated Press said.
Satellite imagery reveals vigorous thunderstorm activity developed in this region Thursday.
Clouds bubbled up to extreme altitudes, signifying intense updrafts common in the most violent storms.
"The skies turned dark, and we thought the summer torrential rain was about to begin," said a resident of Yancheng, according to a live blog published by Sina, a Chinese Web portal (via the New York Times). 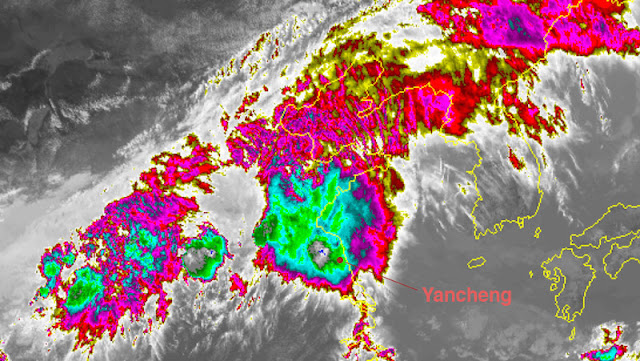 Photo www.wunderground.com
"We ran to our house.
Suddenly, the roof was blown apart, bricks were falling and the house collapsed."
The thunderstorm activity responsible for the twister developed along a feature known as the mei-yu (or baiu) front.
Weather Underground meteorologist Bob Henson explains how this front tends to serve as a focal point for severe weather:
This semi-permanent feature extends from eastern China across Taiwan into the Pacific south of Japan, associated with the southwest monsoon that pushes northward each spring and summer.
The AMS Glossary notes:
"The mei-yu/baiu front is very significant in the weather and climate of southeast Asia as it serves as the focus for persistent heavy convective rainfall associated with mesoscale convective complexes (MCCs) or mesoscale convective systems (MCSs) that propagate eastward."
A number of studies have found that the Mei-yu rainfall tends to be particularly heavy in the summer following an El Nino event.

Ministry of Civil Affairs and National Commission for Disaster Reduction have allocated relief goods to the tornado-hit areas.
They include one thousand tents, two thousand camp beds and lighting equipment.
A State Council working panel has arrived in Yancheng city.
As of Thursday night, over 50 ambulances have taken part in transfering the injured.
Local hospitals are running on full capacity to take care of the wounded.
Medical experts from other provinces have been sent to Yancheng city to assist.

Another 51 people struck by lightning in Germany bringing total to over 100 this week in Europe
at June 24, 2016