A federal disaster declaration was approved for three of the hardest-hit counties in flood-ravaged West Virginia after a historic deluge killed at least 24 people there.
The floodwaters swept away cars, cut power to thousands and trapped hundreds in a shopping centre after 10 inches of rain pounded parts of the state in just 24 hours.
It also submerged a golf course, forcing the PGA to cancel the upcoming Greenbrier Classic.
Tour officials announced Saturday that the tournament, scheduled for July 7 through 10, was nixed due to the floods.
"Cancelling The Greenbrier Classic is certainly the most prudent course of action as our foremost concern is the well-being of those who are having to live through this tragic situation," PGA Tour commissioner Tim Finchem said in a statement.
Meanwhile, officials were still searching Saturday for missing people in Greenbrier County, the area hardest hit by the floods with 16 deaths.
Elsewhere in the state, one person died in Ohio County, another died in Jackson County, and six died in Kanawha County, the West Virginia medical examiner's office said.
The rains - so heavy they were dubbed a "one-in-a-thousand-year event" by the National Weather Service - prompted officials to put 44 out of West Virginia's 55 counties under a state of emergency, primarily in the southeastern part of the state.
The Federal Emergency Management Agency on Saturday granted a request from Gov. Earl Ray Tomblin for assistance for three heavily damaged counties: Kanawha, Greenbrier and Nicholas.
On Friday night, National Guard troops raced to build a temporary roadway in Kanawha County to rescue more than 500 people who had been stuck inside the Elkview Crossings Plaza since Thursday afternoon. 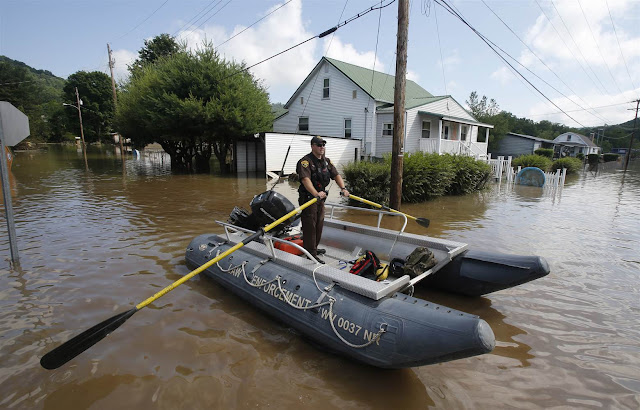 Photo www.nbcnews.com
Crews resumed evacuation efforts Saturday morning for those still inside.
"It's been a long 24 hours. The next 24 hours may not be much easier," Tomblin said Friday afternoon, after authorities spent the day rescuing people off rooftops and whisking them out of their homes as water rose at an alarming speed.
The brutal floods took no mercy on their victims, killing people of all ages.
Among those found dead was 4-year-old Edward McMilllion, who went missing in Ravenswood, Jackson County, along the Ohio River, officials said.
Local reports also said an 8-year-old in Ohio County fell into a creek and later died at a hospital. Meanwhile, in Kanawha County, an elderly man was killed and a woman was swept away in her vehicle, reported NBC affiliate WSAZ.
More than 50 people who had been displaced from their homes were sheltering at Capitol High School in Charleston, officials said.
There were also incredible stories of survival: In Rainelle in Greenbrier County, wheelchair-bound Vietnam War Air Force veteran Karol Dunford, 71, was pulled out of her trailer just in time.
Dunford screamed as the floodwater crept all the way up to her shoulders, The Associated Press reported. 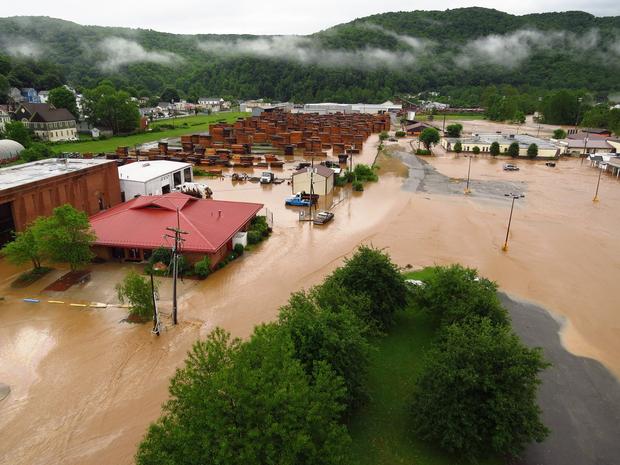 Photo www.cbsnews.com
Rescue teams burst in late Thursday night and saved her, but Dunford lost her wheelchair and home, as well as her pet Chihuahua.
"She got really upset when she realized she doesn't have any underwear, she doesn't have any food, she doesn't have any medicine, she doesn't have anything," her daughter, Randee Suzer, told the AP. "She lives on very modest means.
That trailer was her home.
She didn't have a lot. And she lost it all."
Dunford was taken to a veterans hospital in Beckley for an open wound on her foot, Suzer added. More than 32,000 homes and businesses were still without power across the state Saturday morning, the West Virginia Division of Homeland Security tweeted.
That number was down from a high of nearly 500,000 customers Thursday night.
In White Sulphur Springs in the southern part of the state, natural gas service was turned off after a burning home drifted down a swollen creek.
It was captured on dramatic video.
More than 60 secondary roads were still closed throughout the state as of Saturday, and highways U.S. 60 and U.S. 119 were closed in multiple locations, West Virginia Division of Homeland Security said.
Across the state, rivers reached historic highs Friday.
In Clay County, northeast of Charleston, the Elk River rose to more than 33 feet, breaking the prior record of 32 feet set in 1888, officials said. 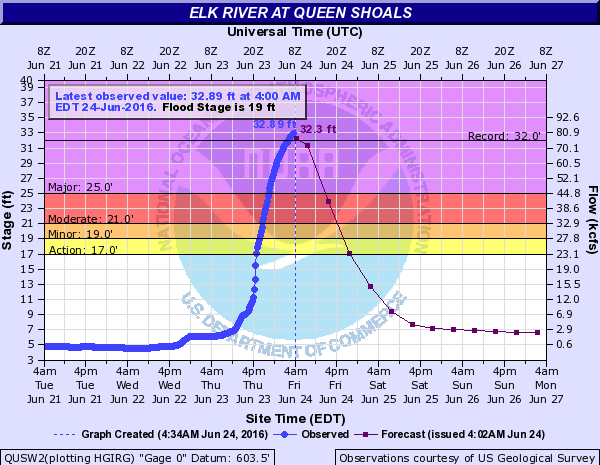 Levels of the Elk River at Queen Shoals, West Virginia. Image: NWS...Graph from floodlist.com
The downpour was the result of a "derecho" weather system that led to at least eight confirmed tornadoes Wednesday in Ohio and northern Illinois on Wednesday evening and Thursday morning, according to the NWS.
Derechos are thunderstorms that produce widespread straight-line wind damage and happen most frequently in the late spring and summer, according to Weather.com.
No flash flood warnings were issued for Saturday in West Virginia.

Another 51 people struck by lightning in Germany bringing total to over 100 this week in Europe
at June 26, 2016