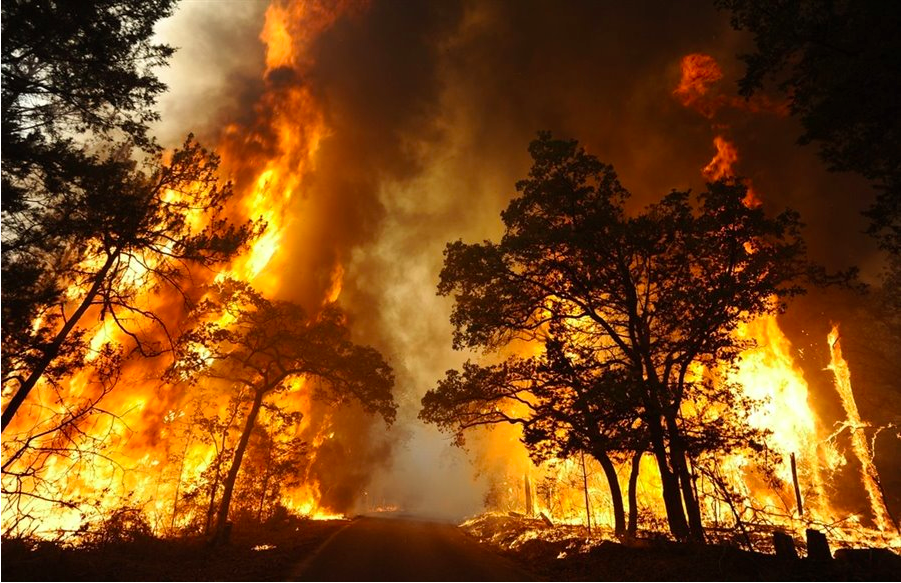 
New Delhi, India's capital city, with a population of 26 million had been described as a gas chamber in the first week of November. A thick haze had been hanging over many parts of India caused by plumes of toxic smoke from farm fires raging in neighbouring states. According to the Central Pollution Control Board that week, an index measuring the level of a deadly air pollutant hit 484 on a scale of 500, the government’s highest number this year. It is thought deadly air pollutants are killing nearly 2 million Indian's every year with the number increasing, however, an unlikely ally arrived to clean up and blow away the pollutants in the way of 2 large tropical cyclones. India was sandwiched between Tropical Cyclone Maha in the Arabian Sea and Cyclone Bulbul in the Bay of Bengal. Cyclone Bulbul was responsible for killing at least seven people in the state and another seven in Bangladesh. Full Story

As California's biggest, most ruinous wildfire this year, a wind-driven blaze that scorched 120 square miles (310 square kilometres) was declared fully contained and extinguished on Thursday a new horror show has erupted in New South Wales, Australia.
According to authorities, an "unprecedented" (90) number of emergency-level wildfires were streaking across New South Wales, in drought-affected areas aided by gusty winds and 35 deg C (95 deg F) heat. There were reports of people trapped in their homes in several places, with the fire crew unable to reach them due to the strength of the fires. "We are in uncharted territory," said Rural Fire Service Commissioner Shane Fitzsimmons, with at least 17 blazes at the highest threat level. "We have never seen this many fires concurrently at emergency warning level." Authorities warned some people to seek shelter from fires rather than flee, as it was now "too late to leave". Full Story

A group of 11,000 scientists called for "stabilising global human population" as the world is facing "untold human suffering" from climate change Full Story

November was a busy month for volcano activity too, Japan's colossus, the Sakurajima volcano spewed smoke and ash 5.5 km (3.4 miles) high with the biggest eruption in more than three years. Full Story

An Arctic blast was predicted to be so cold, forecasters expect it to break nearly 200 records across the US. The National Weather Service was forecasting 170 potential daily record cold temperatures for the second week of November. A little taste of January in November. Full Story

The fires thought to be Australia's worst bushfire season already with summer hardly started escalated as many parts of the country suffering a devastating drought. NSW RFS Commissioner Shane Fitzsimmons said little reprieve in fire conditions could be expected over the next week or throughout the summer months of December, January and February. “The forecast for the balance of the season continues to be driven by above-normal temperatures (and) below-average rainfall to dominate over the coming months,” Full Story

A total of almost a 1,000 quakes, rocked the Californian city of Ventura in just 7 days, 4 months after almost 12,000 quakes hit the Ridgecrest area close by. Full Story

Two million people were evacuated as deadly Cyclone Bulbul finally made landfall into the Bay Of Bengal while Vietnam was preparing for Tropical Storm Nakri landfall. Full Story

It started raining at the end of September and hasn't stopped since as the U.S. UK and Western Europe were enduring their wettest year ever. Full Story

An unprecedented powerful arctic cold front is plunging through the U.S. and will deliver the coldest air of the season to the central, southern and eastern United States, shattering scores of mid-November records in the process. The front was nosediving on Monday night through Texas, the Lower Mississippi Valley and the Tennessee Valley. Full Story

The 2020s are set to be an economic and social upheaval with Europe losing 1000 small farms a day, America's 2019 crop failure claimed a"disaster" and in Asia, hundreds of millions of pigs were being slaughtered due to swine fever. Full Story

Venice braces for more devastating flooding today: Almost 150 flood warnings across Britain after more heavy rain: Heavy snowstorms cause havoc across the southeast of France. Venice, a city that is composed of more than 100 small islands within a lagoon, is especially susceptible to flooding and severe weather. However, the mayor of Venice, Luigi Brugnaro, asserted that this year’s flooding outstrips previous records: “These [floods],” he stated on Twitter, “are the effects of climate change.” Additionally, NOAA records indicate a steady long-term linear trend towards increasing sea levels in Venice. In 1900, when measurements were first recorded, the sea level averaged at 22.5 inches; in 2020, it is projected to exceed 23 ft. Full Story

Thousands of short-tailed shearwaters migrating from Alaska have been washing up on Sydney's iconic beaches, with who knows how many more dying out at sea in what could be confirmation of incredible fish shortages in the Pacific Ocean. The corpses had been spotted at several shorelines including Bondi, Manly and Cronulla. The birds are migrating back to southern Australia to breed after spending the summer in Alaska. But, according to experts, a higher number than usual are dying on the way due to a lack of food. The birds need to be at full strength to make the 14,000km trip over the Pacific but the krill and other fish they feed on have apparently dwindled due to sea temperatures rising. Full Story

On the 4th of July 2019, Independence day, a magnitude 6.4 quake rocked Surles Valley, in Southern California, two days later a much more powerfull magnitude 7.1 struck the Ridgecrest area just a few miles away from the Surles Valley quake. Since then, more than 100,000 small to medium aftershocks, known as "swarmageddon," have hit the same area, including a mag 5.5, a mag 5.4 and a mag 5.0, which begs the question when not if will Southern California receive THE BIG ONE? Full Story

Half the average rainfall of November falls in just 24 hours causing the Met Office to issue another 45 flood alerts in the UK. Full Story

An incredible amount of rainfall! 400 mm of rain in less than 48 hours (50% of the yearly average) fell on parts of France and Italy. Full Story

40% of Chinese pigs, hundreds of millions of animals have died from swine fever in just over a year and It's not if but when the unstoppable disease reaches the West. Full Story

A massive low-pressure system has wrapped its self almost around the entire Northern Hemisphere, with massive amounts of rain and snow which were devastating many parts of the West and probably caused the two major quakes in the Adriatic Region in the last 24 hours. In Europe, the rains just keep on coming and show no signs of relenting.
With "historic" rain causing flooding and mudslides in both Italy and France since October along with unprecedented rainfall in the UK with devastating flooding since the end of September and parts of Greece suffering torrential rains again this weekend, we can safely say many parts of Europe are witnessing their wettest year on record. The National Oceanic and Atmospheric Administration (NOAA)  had already, by September declared 2019 the wettest year on record in the U.S.  along with record flooding in Russia this August and October, leaves one to wonder, just where is all this rain coming from? Full Story

Storm Ezekiel with the strength of a hurricane, Winter Storm Dorothy and the East Coast Cyclone wallop most of the U.S. Full Story

Experts claim the current drought is the worst Australia has ever experienced as 2019 is turning out to be a record year in Australia for all the wrong reasons. Full Story

Typhoon Kammuri was expected to reach at least a Category 3 and could develop into Super Typhoon status: Expected to make a severe impact on the Philippines Monday. Full Story