A group of 11,000 scientists call for "stabilising global human population" as the world is facing "untold human suffering" from climate change 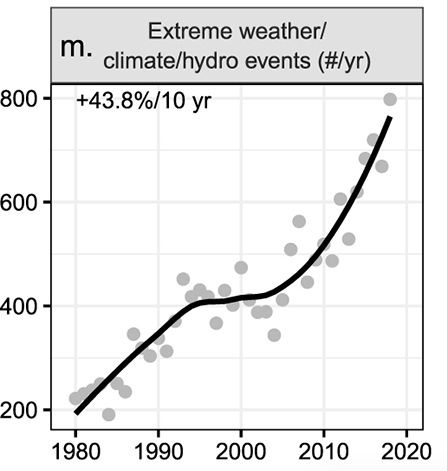 A global group of around 11,000 scientists have endorsed research that says the world is facing a climate emergency. The study, based on 40 years of data on a range of measures, says governments are failing to address the crisis. (Because addressing the crisis costs money).  Without deep and lasting changes, the world is facing "untold human suffering" the study says. The researchers say they have a moral obligation to warn of the scale of the threat. (I would suggest they are around twenty years too late!)

On the same day the report was released, October 2019 was named the warmest October ever across the globe, (every month appears to break some kind of a record these days). Summer 2019 was hottest on record for the Northern Hemisphere according to a report by NOAA. According to a report by Berkeley Earth, hundreds of heat records were broken over the summer of 2019. The records were broken in 29 countries for the period from 1 May to 30 August this year. A third of the all-time high temperatures were in Germany, followed by France and the Netherlands. Many countries in Europe have weather records going back almost 200 years but yet recorded new record highs this summer. It wasn't just Europe of course, the U.S., Canada, Japan, Pakistan and India all saw all-time records smashed in 2019. 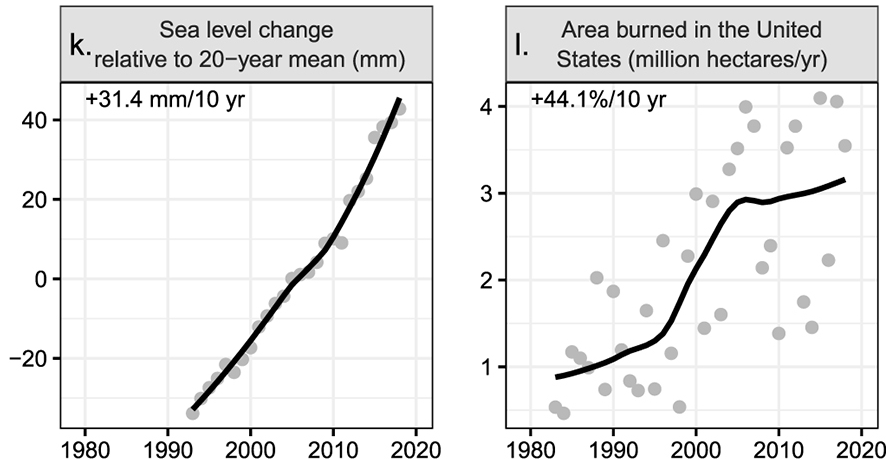 The hot and dry conditions brought a new menace to the planet in 2019 in the way of, out-of-control "country size" wildfires. The 4.3 million hectare fire in Siberia this summer, an area larger than Denmark contributed significantly to climate change. Wildfires in the Amazon rainforest hit a record number this year, according to research carried out by Brazil's space research centre (INPE). It cited an incredible 72,843 fires, marking an increase of 83% compared to 2018 - the highest since records began in 2013. Meanwhile, millions of wild animals, including jaguars, pumas and llamas, perished in the weeks of wildfires that devastated huge swaths of the Bolivian and Brazilian forest and grassland this summer. The number of Indonesian people suffering respiratory problems caused by smoke from forest and peatland fires blanketing parts of Borneo and Sumatra this year was in the millions, according to the authorities. India's capital New Delhi called a "gas chamber" this week with smog from fires and pollution killing nearly 2 million Indian's per year, just yesterday, California's biggest, most ruinous wildfire this year, a wind-driven blaze that scorched 120 square miles (310 square kilometres) was declared fully contained and extinguished only for a new horror show to erupt in New South Wales, Australia. According to authorities, an "unprecedented" number of emergency-level wildfires are streaking across New South Wales, in drought-affected areas aided by gusty winds and 35 deg C (95 deg F) heat

Our oceans are in a worse state, warmer than normal waters are destroying fragile eco-systems, overfishing, dead zones from algae and bacteria are killing marine life at an unprecedented and unsustainable rate. Reuters claimed 2019 will go down as Alaska’s hottest summer on record, the latest benchmark in a long-term warming trend with ominous repercussions ranging from rapidly vanishing summer sea ice and melting glaciers to raging wildfires and deadly death and chaos for marine life. Millions of small dead sea birds have died since 2015, this year, Short-tailed Shearwaters are dying but recent years have seen puffins, murres, and auklets dying in unprecedented numbers thought to be due to starvation. From the Koyukuk River to the Kuskokwim, to Norton Sound, to Bristol Bay's Igushik River, unusually warm temperatures across Alaska this summer led to die-offs of unspawned chum, sockeye, and pink salmon. In 2018, the Scotsman reported, Global warming was being blamed for Scotland’s worst salmon season in living memory. Incredibly, some beats on famous rivers like the Spey and the Nith recorded not a single salmon caught during the entire season. Just two salmon were caught on the river Fine in Argyll, where once almost a thousand caught each season.

Sylvia Earle, author of the World Is Blue has spent 70,000 hours underwater researching our oceans and is considered one of the most important Oceanographers in the world. She claims, 90% of large fish have disappeared. Almost 40% of phytoplankton which generates oxygen and carbon capture is gone, disrupting the basic system of life on earth, leaving our oceans on the brink of collapse. As long ago as 2006, CBS News claimed our oceans would be empty of fish by 2048. Jellyfish are taking over, fast becoming the “NEW KINGS OF THE OCEAN,” The rapid growth over the last few decades of these creatures is a sign of the planet's deteriorating marine health, according to expert Lisa-ann Gershwin.

Seabirds populations have plummeted to record lows thought to be due to lack of food. According to a report from the University of Aberdeen, there has been a 70% decline in the world seabird population since 1970. Another disturbing report by Kenneth Rosenberg, Ph.D., of the Cornell Lab and American Bird Conservancy, claimed “billions” of North American Birds Have Vanished in the US and Canada, in the last fifty years.

It is not really known or understand just how much plastic is in our oceans but it is estimated at tens of trillions of particles weighing anything between 100 and 250 thousand metric tons, if we could clean up the plastic well, the nuclear pollution in our oceans will take a bit longer to clean, between 50,000 to 250,000 years.

And here comes the Cavalry

The BBC's Matt McGrath reported on Wednesday that a global group of around 11,000 scientists, led by William J. Ripple professor of ecology at Oregon State University and researcher Christopher Wolf, have endorsed research that says the world is facing a climate emergency, (you don't say!)

Professor Ripple said: "Despite 40 years of major global negotiations, we have continued to conduct business as usual and have failed to address this crisis." "Climate change has arrived and is accelerating faster than many scientists expected."

The report, released on the day that satellite data shows that last month was the warmest October on record, the new study says that simply measuring global surface temperatures is an inadequate way of capturing the real dangers of an overheating world. So the authors include a range of data which they believe represents a "suite of graphical vital signs of climate change over the past 40 years". These indicators include the growth of human and animal populations, per capita meat production, global tree cover loss, as well as fossil fuel consumption.

Taken together, the researchers say most of their vital signs indicators are going in the wrong direction and add up to a climate emergency. "An emergency means that if we do not act or respond to the impacts of climate change by reducing our carbon emissions, reducing our livestock production, reducing our land clearing and fossil fuel consumption, the impacts will likely be more severe than we've experienced to date," said lead author Dr Thomas Newsome, from the University of Sydney. "That could mean there are areas on Earth that are not inhabitable by people."

The authors set out to present a clear and simple graphical picture of a broader range of indicators that can drive home to the public and to governments that the threat is serious while the response has been poor. Where it differs is in showing that while things might be bad, they are not hopeless. (I would say it's hopeless). The researchers show six areas in which immediate steps should be taken that could make a major difference.

These are: Energy: Politicians should impose carbon fees high enough to discourage the use of fossil fuels, they should end subsidies to fossil fuel companies and implement massive conservation practices while also replacing oil and gas with renewables.

Short-lived pollutants: These include methane, hydrofluorocarbons and soot - the researchers say that limiting these has the potential to cut the short-term warming trend by 50% over the next few decades.

Economy: Convert the economy's reliance on carbon fuels - and change away from growing the world's gross domestic product and pursuing affluence.

Population: The world needs to stabilise the global population which is growing by around 200,000 a day, almost 75 million people a year.

The idea of trying to influence human population growth is highly controversial and has been deemed too hot to handle by UN negotiators. The authors say that looking the other way is no longer an option. "It is certainly a controversial topic - but I think that population should be talked about when considering human impacts on the Earth," said Dr Newsome. "It's important when presenting these results to look at some positives, and one of the more positive things that we've pulled out of this data is that there is now a slight decline in birth rates at a global level."