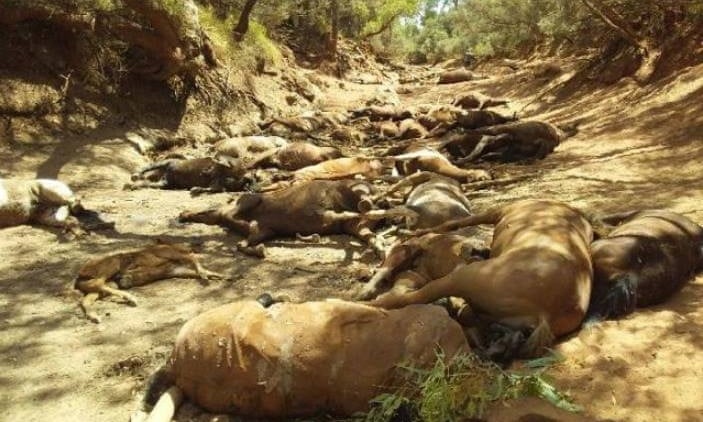 Experts say current drought could be the worst Australia has ever experienced. According to the Bureau of Meteorology's (BOM) summer outlook, the drought plaguing Australia could be the worst ever experienced, as the parched land continues to suffer water shortages and bush fires. BOM is expecting a hotter summer than usual. November 2019 has already broken many heat records as well as its worst bushfire season ever and all this happened before the official summer season started.

The forecast offered no relief to Australia’s devastated farming sector, with the country’s largest and most lucrative crop, wheat, facing the worst damage in the third straight year of drought. Temperatures across most of the country are highly likely to be warmer than average during the day and night, the bureau said. The outlook also means the risk of heatwaves is increased. Australia’s shaky power grid has suffered blackouts over the past two summers as ageing coal-fired plants crashed in the heat, just as power demand for airconditioners soared, according to Reuters

2019 is turning out to be a record year in Australia for all the wrong reasons. Parts of Australia have already endured the hottest January ever, the wettest February ever and now Victoria is enduring the hottest start to autumn ever.

The first 22 days of 2019 gave an insight into what was to come, according to BoM, Australia was home to all 15 of the world's hottest temperatures on Tuesday the 22nd of January. These ranged from Tarcoola in inland South Australia, which reached 49.1 degrees, to Yulara in the Northern Territory at 46.1 degrees in the 15th slot. Jacob Cronje, a senior meteorologist with Weatherzone, said he "wouldn't be shocked" by a 50-degree C, 122 deg F this summer.

The Australian state of Victoria suffered the hottest start to March on record for the southern third of the country.

About 40 dead feral horses were found at a waterhole and another 50 were found in poor health and had to be culled by the Central Land Council in January. The region had suffered record run of 12 days exceeding 42C. Also in January 2019 thousands of birds were found dead at one of Western Australia's most important inland wetlands, again a heatwave being responsible for the deaths. Flying foxes were said to have been dying ‘on a biblical scale’ due to the record-breaking Australia heatwave in January. Millions of fish died in far western NSW as drought the conditions continue to grip the state.
Ecologists have warned the impact of the heatwave could be taking a heavy toll on unseen populations of wild animals.