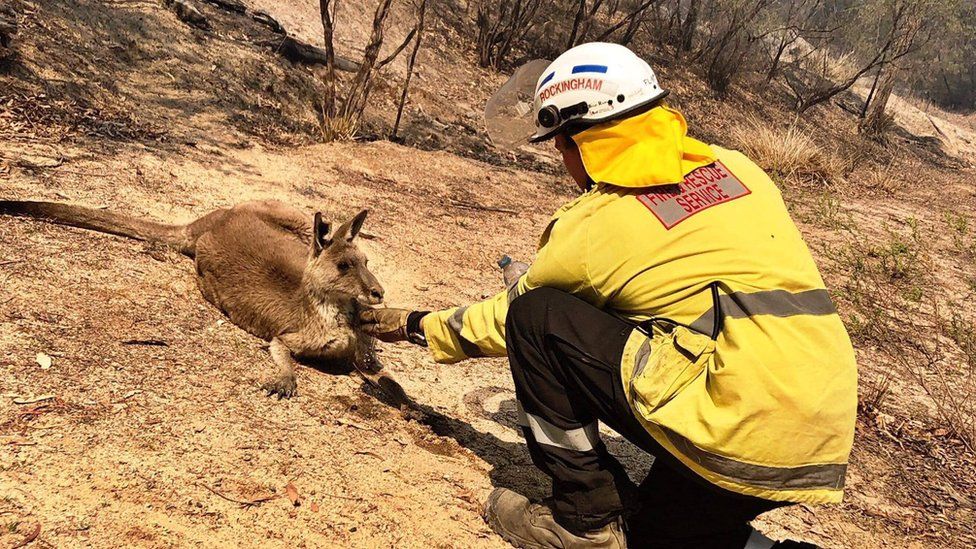 This dehydrated kangaroo was freed from a wire fence in the aftermath of ablaze. Credit, NSW Department of Fire and Emergency Services.

As California's biggest, most ruinous wildfire this year, a wind-driven blaze that scorched 120 square miles (310 square kilometres) was declared fully contained and extinguished on Thursday a new horror show has erupted in New South Wales, Australia.

According to authorities, an "unprecedented" (90) number of emergency-level wildfires are streaking across New South Wales, in drought-affected areas aided by gusty winds and 35 deg C (95 deg F) heat. There are reports of people trapped in their homes in several places, with the fire crew unable to reach them due to the strength of the fires. "We are in uncharted territory," said Rural Fire Service Commissioner Shane Fitzsimmons, with at least 17 blazes at the highest threat level. "We have never seen this many fires concurrently at emergency warning level." Authorities warned some people to seek shelter from fires rather than flee, as it was now "too late to leave".

In Queensland, people in several towns including Cooroibah and Tewantin, with a combined population of around 6,500, were told to leave by the state’s fire and emergency services. Australia is suffering an early and fierce start to its bushfire season. This is one of Australia’s worst bushfire seasons with a record number of emergency warnings and firefighters battling dozens of fires and the summer has just started.

NSW is in the grip of a devastating drought meaning the fires will be almost impossible to extinguish without the help of rain. Last summer, Australia experienced its hottest summer on record, according to the nation's Bureau of Meteorology. Hundreds of individual heat records were shattered across the country. The warm weather, caused bushfires, blackouts and a rise in hospital admissions. Wildlife also suffered, with reports of mass deaths of wild horses, native bats and fish. Officials have confirmed that 2018 and 2017 were Australia's third and fourth-hottest years on record respectively.