The paradox which is Africa: The crippling drought in the south which is drying up the world-famous Victoria Falls': While unprecedented rainfall kills hundreds further north 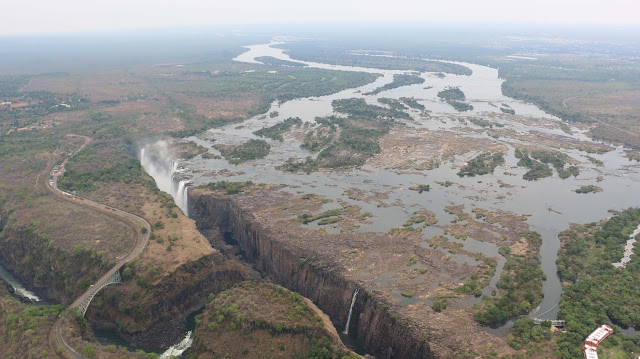 Photo Credit africaalbidatourism.com. The world-famous Victoria Falls' are showing signs of stress as bare cliffs raise the spectre of no water as a crippeling drought bites

The effects of severe drought and climate change are having an impact on one of the world's great natural wonders, Victoria Falls. The world-famous Victoria Falls' are showing signs of stress as bare cliffs raise the spectre of no water as drought bites. The Victoria Falls, Africa's biggest, lies between the southern African nations of Zambia and Zimbabwe. It is formed as the waters of the Zambezi River plummet over a precipice 1.7 kilometres wide by more than 100 metres deep. But now, the cliffs – hidden behind an avalanche of water when the river is in full flow – stand naked. Normally, 2000 cubic metres of water a second passes over the falls but the average this year was 1200, a serious possibility the falls could one day run dry. The low falls are becoming more frequent. Sydney Morning Herald

Meanwhile further south, South Africa’s Karoo region has always been parched — it means land of thirst in the language of its earliest inhabitants, the Khoisan hunter-gatherers. Yet nothing prepared residents of its oldest town, Graaff-Reinet, for their worst drought in more than a century. As the dry spell entered its fourth year, tap water turned brown and smelled like rotting fish caused by the water behind the Nqweba Dam drying up and depositing tens of thousands of dead fish onto cracked earth, queues began forming at municipal boreholes and farm animals died in their hundreds. The bleak choices facing millions of people in drought-stricken southern Africa — whether to flush toilets or not or to keep animals alive or let them die. An abnormally hot summer with rainfall 75 per cent below average, has struck the whole region. The United Nations says 45 million people in southern Africa face hunger. New York Post

BOTSWANA - Southern Africa is experiencing one of the worst droughts in years, with more than 40 million people expected to face food insecurity because of livestock and crop losses. Botswana, Lesotho, Namibia and Zimbabwe have declared it an emergency. In semi-arid Botswana, the farmers are reeling after the worst drought in a decade wiped out entire harvests and left the land littered with dead livestock. Two-thirds of the crops planted last season failed, while Ngamiland, a rich beef producing region, has recorded nearly 40,000 cattle deaths. Rancher Casper Matsheka says there was no food or water, so his animals starved to death. “The goats died, as well as the cattle, as you can see the carcasses all over. We were really affected. If only the government could subsidize the prices of feed and vaccines for the livestock during such times,” he said. VOA News

Zimbabwe is currently facing a severe drought caused by poor rains that affected food harvests between October 2018 and May 2019. In August 2019, the government declared the 2018/19 drought and cropping season “a State of National Disaster” and appealed for international humanitarian assistance. Reports from WFP estimate that at least 2 million people are affected. The prices of staple food (maize) have increased by 31 per cent higher compared to the same time last year. The severe drought crisis is coupled with a devasting economic crisis. Relief Web

Over the last 30 years in Somalia, recurrent droughts and floods have become more intense, frequent and unpredictable and linked to climate change. In October, Somalia was devastated by floods, affecting over half a million - or 574,000 - people. Hundreds of thousands of them have been forced to leave their homes and many of them are in dire need of clean water, shelter, health and food supplies. Earlier in the year, the January to March Jilaal season was abnormally hot and dry, and the Gu' rains, which usually come between April and June, arrived late and then in overabundance across most of the country. This caused massive crop failure and wiped out many herders' livestock, threatening millions with starvation. Early aid efforts fended off the worst of a hunger crisis, but families are near to breaking point as they now face yet another extreme weather shock. Relief web

Meanwhile, unprecedented rainfall has killed hundreds in Central Africa with nearly one million displaced and thousands of hectares flooded and rainfall at 300% above average.

An incredible downpour delivered two years of rainfall in just one day on the small East African nation of Djibouti as East Africa continues to suffer astonishing downpours which started in October. Apparently, rainfall from October to mid-November has been up to 300% above average in the Horn of Africa region affecting more than 250,000 people.
Meanwhile, flooding in nearby Kenya has affected more than 160,000 people since the onset of the rains in October, according to the Kenya Red Cross Society (KRCS). At least 120 people have reportedly died, including dozens who lost their lives after a landslide in West Pokot County on 23 November. KRCS said that nearly 18,000 who are displaced countrywide, including 10,000 in West Pokot County. According to the Kenyan government, 16,000 houses have been destroyed across the country. Full story

While the capital city Kinshasa is dealing with devastating flash floods and landslides which have left more than 40 people dead, northern provinces of the Democratic Republic of the Congo are experiencing some of the worst flooding for 25 years. Flooding began back in October after heavy rains caused the Ubangi and Congo rivers and tributaries to overflow. Initially, Wide areas of North and South Ubangi provinces were affected. Since then the flood situation has worsened, affecting other provinces, including Mongala, Maniema, Bas-Uélé, Haut-Uélé and Tshopo. North Ubangi, South Ubangi and Mongala are the worst affected provinces, according to the UN. Schools, bridges, water points, churches, hygiene facilities, farmland and hundreds of shelters have been destroyed. As of 27 November, the UN says that over 225,000 people across the 3 provinces are in need of humanitarian assistance. It is estimated that over 235,000 people have been affected by the flooding South Ubangi. Charity Caritas-Congo reported 10 flood-related deaths in North Ubangi, where around 180,000 people have been affected. The situation is expected to deteriorate as the rainy season extends into December. Full story
In the Central African Republic, flooding began around 21 October after a period of heavy rain caused rivers, including the Ubangi, to overflow. By mid-November, flooding had destroyed 10,000 homes and impacted 57,000 people, according to the Norwegian Refugee Council (NRC). Many of those homes were in areas around the capital, Bangui. In a report of 22 November, the United Nations Office for the Coordination of Humanitarian Affairs (UN OCHA) said that about 100,000 people are now affected by the floods, including more than 33,000 people in Bangui and Bimbo. Other areas affected are the prefectures of Basse-Kotto, Lobaye, Mbomou, Nana-Gribizi, Ombella M’Poko, Ouaka and Ouham. Full story