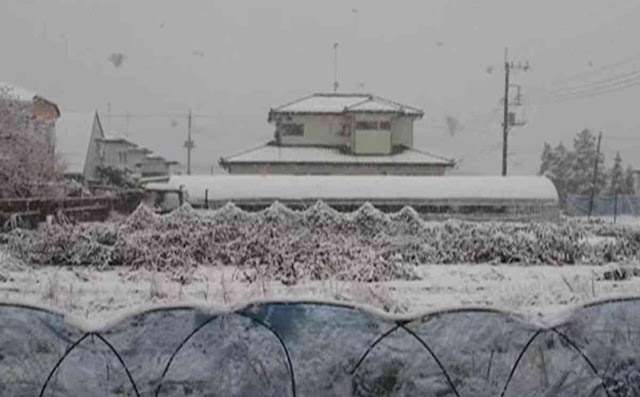 TOKYO — Snow fell in Tokyo and other parts of eastern Japan Thursday, the first snowfall in November in the capital in 54 years, with the unusually cold snap disrupting traffic and spiking electricity demand.
East Japan Railway Co said services on parts of the Ome and Chuo lines were suspended as snow-laden tree branches sagged over the tracks.
Trains on other lines such as Seibu and Keio also saw delays, operators said.
Tokyo Electric Power Co (TEPCO) said electricity consumption surged to 95% of supply capacity as of 10 a.m. due to rising demand for heating.
The temperature in the capital and neighboring areas fell to near zero on Thursday morning.
Snowfall was observed starting at 6:15 a.m. in central Tokyo, 40 days earlier than average.
Other cities in eastern Japan such as Yokohama and Utsunomiya also saw falls.
According to the agency, a front moved eastward near the Izu Islands, and a cold air mass with a minus 3 C temperature at an altitude of around 1,500 meters was spreading over the Kanto region including Tokyo.