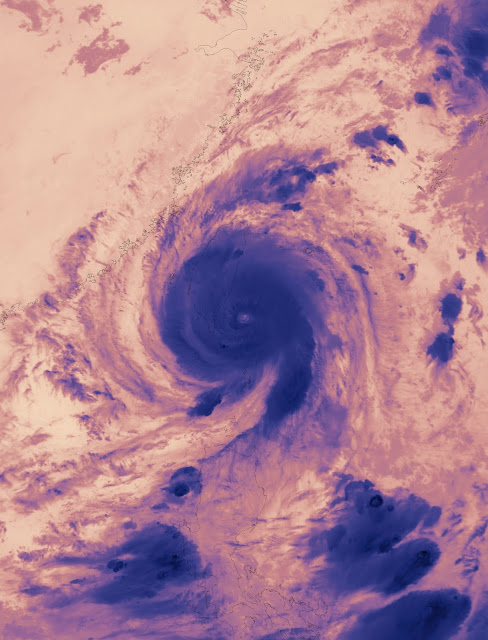 Thermal image of Nepartak This is a thermal image of Typhoon Nepartak from the MODIS instrument aboard NASA's Aqua satellite taken on July 7 at 17:45 UTC (1:45 p.m. EDT) as it was approaching Taiwan. Credits: NASA Goddard MODIS Rapid Response

Super Typhoon Nepartak hit Taiwan with powerful winds and torrential rain early on Friday. Thousands of people have been forced to evacuate their homes as the island cancelled hundreds of flights and shut offices and schools for the day.
With gusts of up to 234 kph (145 mph) the typhoon landed at Taimali township in eastern Taitung county shortly before 6:00 am Friday morning (2200 GMT on Thursday).
TV footage showed ferocious winds battering Taitung, which recorded the strongest gusts since 1901, according to Taiwan's Central Weather Bureau.
Almost 15,000 people have been moved from homes that were deemed prone to landslides or flooding.
As many as 331,900 households lost power due to the storm, with close to 255,000 without electricity as of Friday morning.
The government said financial markets, schools and offices would all be closed Friday and the bullet train service suspended.
Most scheduled domestic flights were cancelled while 365 international flights were affected at Taipei's two main airports.
The storm had a radius of 200 kilometres and was moving at a speed of 13 kph.
"It is expected the strength of this typhoon will continue to weaken and slow down in speed," the weather bureau said.