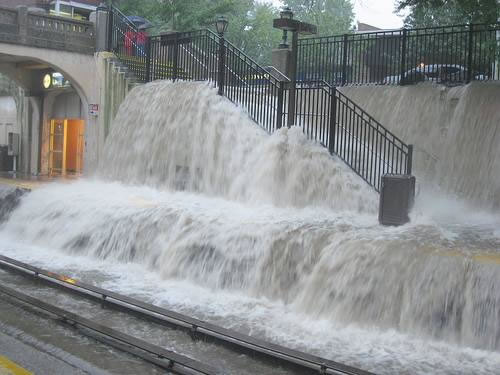 
Heavy rainfall pounded Seoul and the central regions of the peninsula Tuesday, forcing some 200 people from their homes.
The heavy downpour also caused floods, traffic jams and the collapse of some facilities.
The Korea Meteorological Administration said 119 millimeters of rain poured down in Seoul as of 2:20 p.m. Tuesday.
A heavy rain warning has been issued for Seoul and the central regions with the daily precipitation of the capital expected to be 180mm or more within 12 hours.
As of Tuesday afternoon, the KMA issued heavy rain warnings for cities in Gyeonggi, Gangwon and North Chungcheong provinces.
The KMA said up to 300mm of rain is predicted to pour down in the central region until Wednesday, as tropical storm Nepartak makes its way into a stretch of the western Pacific Ocean, influencing skies of East Asian countries.
About 180 residents have evacuated a town in Uljin County in North Gyeongsang Province, due to a possible landslide from the nearby mountains.
Authorities said they are looking for four residents aged 70 to 80 in a small town in Jeongseon County in Gangwon Province, who went missing at 3 a.m. on Tuesday after a car capsized by the stream due to floodwaters.
The Defense Ministry, meanwhile, said Hwanggang Dam of North Korea appears to have reached its full water level and that they are watching closely for a possible discharge of waters without prior notice.
"We are maintaining communication with the relevant organizations for the possible discharge," said ministry spokesman Moon Sang-kyun.
He added that it would be inappropriate yet to deem whether the North's discharge without notification is an attack through intentional flooding.
Hwanggang Dam is located on the mainstream of Imjin River, some 42.3 kilometers north of the Military Demarcation Line.
It is estimated to hold up to 300 million to 400 million tons of water.
A sudden discharge from the dam can inflict damage in the areas near Yeoncheon County in Gyeonggi Province.
North Korea has previously discharged water without notifying the South twice in May, causing damages to fishermen operating in the river.
Meanwhile, damages from the rain were reported throughout the day in Seoul, including some 20 districts that suffered from sewage reflux and at least 2,000 families in Gangseo-gu reported experiencing power outages.
The embankment of some houses collapsed in Jung-gu, while a 1-meter-wide and 1 meter-high sinkage was created in a street near the Mapo Bridge over the Hangang River, causing the nearby roads to close for several hours.
The Seoul Metropolitan Government closed off traffic to Cheonggyecheon Stream, Jamsu Bridge and some parts of Dongbu Expressway, due to the increasing level of the Hangang River.
A heavy rain warning is issued when at least 110mm of rain is predicted to pour down for six hours or at least 180mm of rain is predicted to fall for 12 hours.
Weather forecasters encouraged people to be aware of safety accidents amid torrential rains accompanied by thunder. Contrary to the heavy rain that pounded most of the cities in the central regions of the peninsula, southern provinces and Jejudo Island has been under a heat wave.
The heat wave warning was issued for Jejudo Island.
There was an overnight low of 26.2 degrees Celsius on Jejudo Island on Monday night.
Cities like Gwangju, Jeongeup and Gochang in North Jeolla Province and Mokpo in South Jeolla Province saw the tropical night phenomenon for the first time this year.
It is five to 19 days earlier than the tropical night phenomenon that is normally observed in summer. The earliest was in Mokpo on July 10, last year.
A tropical night phenomenon is observed when the overnight low hits over 25 degrees Celsius, from 6 p.m. to 9 a.m. the next morning.
The KMA said that the peninsula is under the influence of the seasonal rain front, accompanied by heavy rain clouds which are moving northward.
It added that southern regions will see sporadic rainfall due to this.
The KMA predicted that torrential rain would start again in the third week of July in all regions.