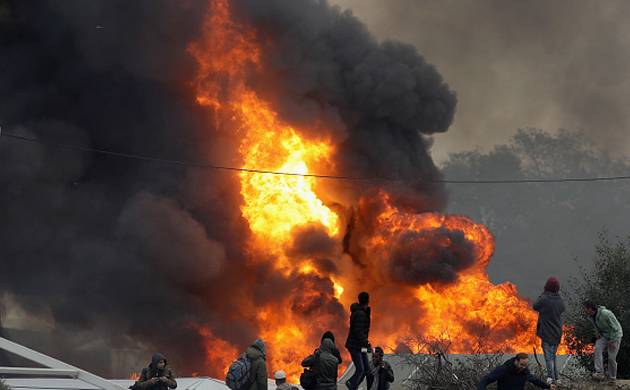 Photo News Nation
At least 73 people have been killed and more than 100 wounded after a lorry carrying fuel blew up in western Mozambique, according to the government.
In a statement on Thursday, officials said that the vehicle had overturned while transporting fuel to Malawi from the port city of Beira.
"The incident occurred when citizens tried to take petrol from a truck" in a small village in Tete province, the statement said.
"Because of the heat, the truck burst into flames."
The initial death toll stood at 43, but official later raised it to 73.
At least 110 others suffered burns, the government said.
A local journalist told AFP news agency the lorry had crashed on Wednesday and exploded on Thursday afternoon, as scores of people tried to siphon off fuel.
The victims included children.
The injured victims were taken to Tete provincial hospital.
The government aims to send three ministers to the scene on Friday to monitor the rescuers' work.


Home page
Related
As 2016 is set to be the warmest year ever: Stunning unprecedented events reveals the state of our oceans
Car wash septic tanks emerge as radiation threat in Fukushima: Amount of polluted sludge is estimated at several thousands of tons.
A mag 5.3 earthquake shakes central Oklahoma: Significant damage and a massive gas leak...
Leaked Army video shows 'near' future of urban hellscapes
Tension building: Iran bullying US in the Persion Gulf N Korea claim sanctions laughable and Al-Shabaab terorrists flood Mexican border
Tension building: S.Korea unveils plan to remove N. Korean capital Pyongyang from the map with tactical nuclear weapons
Tension building! North Korea claims it's fifth nuclear test while students are being taught “doom” and end of the world in schools
UN Supplying migrants with a document on how to break the law in Europe which led to 21 being attacked on a train in Germany and the death of a young Swedish nurse
Tension building: Czechs and Hungarians call for European army: Germany wants compulsory national service: US backed Turkey invades Russian backed Syria
The Battle of Gog and Magog? Russia Iran and Turkey come together North Korea prepares for the "end" and German's are told to stock up for disaster!
at November 18, 2016