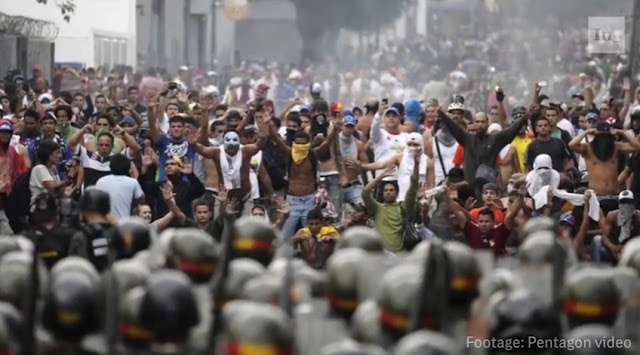 According to a startling Pentagon video obtained by The Intercept, the future of global cities will be an amalgam of the settings of "Escape from New York" and "Robocop" — with dashes of the "Warriors" and "Divergent" thrown in.
It will be a world of Robert Kaplan-esque urban hellscapes — brutal and anarchic supercities filled with gangs of youth-gone-wild, a restive underclass, criminal syndicates, and bands of malicious hackers.
At least that's the scenario outlined in "Megacities:
Urban Future, the Emerging Complexity," a five-minute video that has been used at the Pentagon's Joint Special Operations University.
All that stands between the coming chaos and the good people of Lagos and Dhaka (or maybe even New York City) is the U.S. Army, according to the video, which The Intercept obtained via the Freedom of Information Act.


Home page
Related
Tension building: Iran bullying US in the Persion Gulf N Korea claim sanctions laughable and Al-Shabaab terorrists flood Mexican border
Tension building: S.Korea unveils plan to remove N. Korean capital Pyongyang from the map with tactical nuclear weapons
Tension building! North Korea claims it's fifth nuclear test while students are being taught “doom” and end of the world in schools
UN Supplying migrants with a document on how to break the law in Europe which led to 21 being attacked on a train in Germany and the death of a young Swedish nurse
Tension building: Czechs and Hungarians call for European army: Germany wants compulsory national service: US backed Turkey invades Russian backed Syria
The Battle of Gog and Magog? Russia Iran and Turkey come together North Korea prepares for the "end" and German's are told to stock up for disaster!
at October 30, 2016

Interesting that at 3:37 they mention "drain the swamp." Trump's new words or military's new words? Are they preparing the masses for "draining the swamp?"