Tension building! North Korea claims it's fifth nuclear test while students are being taught “doom” and end of the world in schools 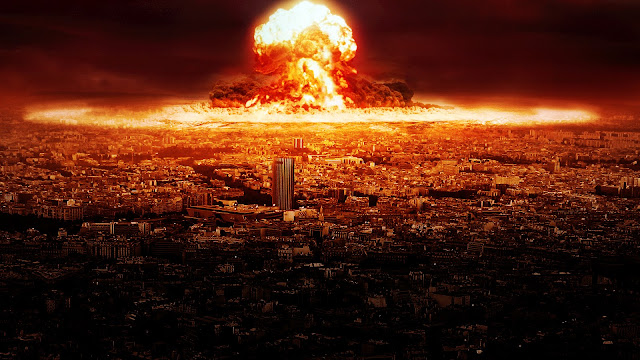 Photo wallpaperfolder.com Seoul -
North Korea is believed to have conducted a fifth nuclear test, its most powerful to date, South Korea's military said on Friday after monitors detected a 5.3-magnitude "artificial earthquake" near its main nuclear site.
A confirmed test by the isolated North would send tensions soaring over its nuclear and ballistic missile ambitions, which have already earned international condemnation and United Nations sanctions.
The quake was detected near North Korea's Punggye-ri nuclear test site as the country celebrates Foundation Day, which marks the anniversary of the founding of the nation in 1948.
"We believe that it was a nuclear test.
We are trying to figure out whether it was successful.
The blast measured about 10 kilotons," a defence ministry spokesman told reporters.
The North's third nuclear test, staged in February 2013, was previously considered the most powerful to date, with a yield of six to nine kilotons.
Authorities in Japan and South Korea said the tremor, measured at 5.3 by the US Geological Survey, showed every sign of another test, the latest since a January 6 test at Punggye-ri.
"The 10-kiloton blast was nearly twice the fourth nuclear test and slightly less than the Hiroshima bombing, which was measured about 15 kilotons," said Kim Nam-Wook from the South's meteorological agency said. Japan's public broadcaster NHK reported the country's defence ministry was preparing to dispatch aircraft to analyse air samples to see if any radiation could be detected.
In New York - The UN Security Council is strongly condemning North Korea's latest ballistic missile launches and threatening "further significant measures" if it refuses to stop its nuclear and missile tests.
The UN's most powerful body agreed to the tough statement hours after a closed-door emergency meeting on Tuesday to discuss the three launches which landed near Japan.
The council expressed serious concern that North Korea carried out the launches "in flagrant disregard" of its demands.
Meanwhile North Korean students are being taught classes about “doom” and the end of the world - heightening fears the country is preparing for a deadly showdown with its Western enemies.
In an editorial in state-run newspaper Rodong Sinmum, the director of the maverick state’s Institute for International Studies issued a terrifying prediction of an ultimate and devastating war.


Home page
Related
UN Supplying migrants with a document on how to break the law in Europe which led to 21 being attacked on a train in Germany and the death of a young Swedish nurse
Tension building: Czechs and Hungarians call for European army: Germany wants compulsory national service: US backed Turkey invades Russian backed Syria


The Battle of Gog and Magog? Russia Iran and Turkey come together North Korea prepares for the "end" and German's are told to stock up for disaster!
at September 09, 2016