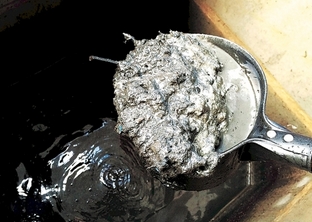 Photo Japan Times
Storage tanks at car wash facilities near a crippled Japanese nuclear power plant contain sludge which is seven times higher than the legal radioactive limit, Japan's Kyodo news agency reported Sunday. An inspection of car wash facilities in the Fukushima prefecture found sludge containing up to 57,400 becquerels of radioactive material per kilogram, compared with the limit of 8,000 becquerels per kilogram allowed by authorities, according to a document Kyodo obtained.
The radioactive material is believed to come from ash and soot which was washed from vehicles shortly after the Fukushima Daiichi nuclear power plant disaster in March 2011, officials said.
The six-reactor plant suffered a triple meltdown after it was hit by a magnitude-9 earthquake and resulting tsunami.
Fukushima Prefecture has some 1,700 car wash facilities where a growing number of tanks are filled to capacity, officials said, adding the amount of polluted sludge is estimated at several thousands of tons.
Last month the Japanese government said that the cost of decommissioning the damaged nuclear plant is expected to soar to hundreds of billions of yen annually from the initial estimate of 80 billion yen (766 million dollars) each year.


Home page
Related
A mag 5.3 earthquake shakes central Oklahoma: Significant damage and a massive gas leak...
Leaked Army video shows 'near' future of urban hellscapes
Tension building: Iran bullying US in the Persion Gulf N Korea claim sanctions laughable and Al-Shabaab terorrists flood Mexican border
Tension building: S.Korea unveils plan to remove N. Korean capital Pyongyang from the map with tactical nuclear weapons
Tension building! North Korea claims it's fifth nuclear test while students are being taught “doom” and end of the world in schools
UN Supplying migrants with a document on how to break the law in Europe which led to 21 being attacked on a train in Germany and the death of a young Swedish nurse
Tension building: Czechs and Hungarians call for European army: Germany wants compulsory national service: US backed Turkey invades Russian backed Syria
The Battle of Gog and Magog? Russia Iran and Turkey come together North Korea prepares for the "end" and German's are told to stock up for disaster!
at November 07, 2016