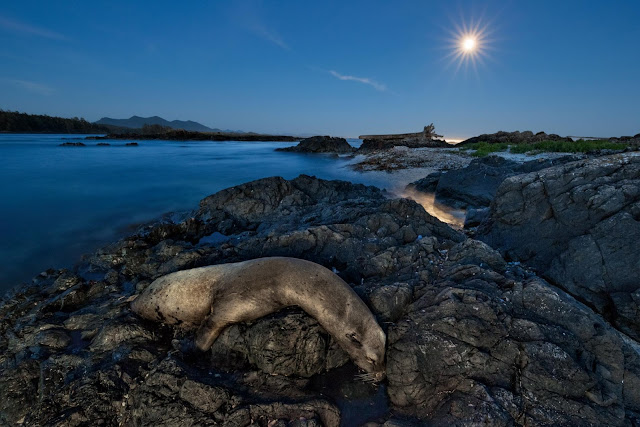 Thousands of California sea lions, such as this one on rocks near Canada’s Vancouver Island, died in 2014 and 2015. Many starved as they struggled to find food in an unusually warm eastern Pacific.Photograph by Paul Nicklen National Geographic


As a provisional WMO (World Meteorological Organization) Statement this week claimed 2016 to be the hottest ever recorded, we should not be surprised therefore to find our oceans to be showing signs of stress as the delicate balanced eco system is also being stretched to its limit.
This week it has been reported by Anglesey Daily Post that one of the world's rarest turtles has been washed up in Wales, Great Britain 4,000 miles from its home in the Gulf of Mexico home by strong currents. The animal, which has been called Menai, was very near death but is now on the road to recovery.
The Daily Mail are reporting  locals on the island of Colonsay in the Inner Hebrides have been trying to identify three sets of badly decomposed remains which washed ashore in August this year, which appear to be dead polar bears, see below, photo Daily Mail. 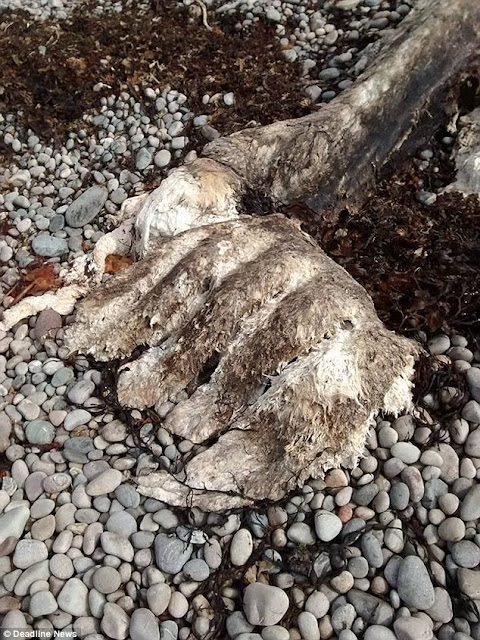 In 2010 after two reports of polar bears being washed up on the British coast that year, amazed locals reported seeing icebergs off the North-west coast of England in Morecambe bay and in the Irish Sea

Arctic sea ice remained at very low levels, especially during early 2016 and the October re-freezing period, and there was significant and very early melting of the Greenland ice sheet this year, due to the record warmth.
Ocean heat was boosted by the El Niño event, contributing to coral reef bleaching, and above-average sea-level rise.
A deadly patch of warm water along the American West coast called the ‘Pacific blob’, stretching all the way from California up to the Gulf of Alaska, Has killed thousands of California sea lions in 2014 and 2015. Many starved as they struggled to find food in an unusually warm eastern Pacific. Strange exotic tropical fish have been reported off the coast of Alaska. In the winter of 2015 blue-footed diving seabirds called Cassin’s auklets, have been washing up dead by the thousands on beaches from San Francisco to Alaska, it is thought more than 250,000 died from lack of food. An unprecedented die off  which began in 2011 along the West coast of North America when billions of sea urchins and sea stars died suddenly in what was 'one of the most unusual and dramatic die-offs marine biologists have ever recorded.' 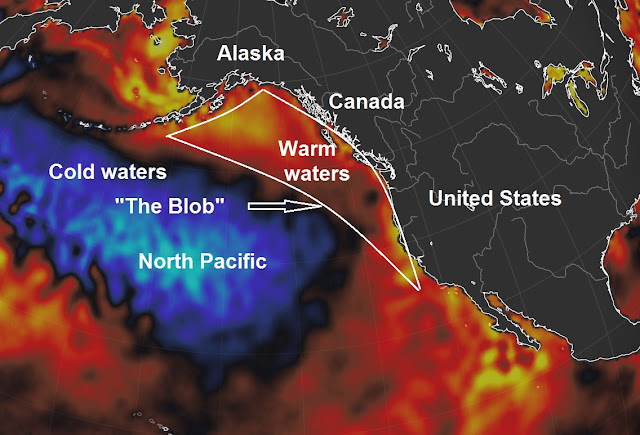 "The Blob" Which is thought to be cooking The Pacific.

Just this month National Geographic announced a huge puffin die-off which probably is linked to hotter seas. Hundreds of the birds are washing up dead in the Bering Sea, causing alarm among scientists. It may be linked to climate change.


The Big Wobble is trying to keep updated with the mass die offs in our oceans however most of these catastrophes are not reported by main stream media and this blog is surely just scratching the surface as to the state of our sea’s, and with over fishing the future of our oceans looks pretty bleak.

Written and researched by Gary Walton... Thanks to National Geographic

Home page
Related
Car wash septic tanks emerge as radiation threat in Fukushima: Amount of polluted sludge is estimated at several thousands of tons.
A mag 5.3 earthquake shakes central Oklahoma: Significant damage and a massive gas leak...
Leaked Army video shows 'near' future of urban hellscapes
Tension building: Iran bullying US in the Persion Gulf N Korea claim sanctions laughable and Al-Shabaab terorrists flood Mexican border
Tension building: S.Korea unveils plan to remove N. Korean capital Pyongyang from the map with tactical nuclear weapons
Tension building! North Korea claims it's fifth nuclear test while students are being taught “doom” and end of the world in schools
UN Supplying migrants with a document on how to break the law in Europe which led to 21 being attacked on a train in Germany and the death of a young Swedish nurse
Tension building: Czechs and Hungarians call for European army: Germany wants compulsory national service: US backed Turkey invades Russian backed Syria
The Battle of Gog and Magog? Russia Iran and Turkey come together North Korea prepares for the "end" and German's are told to stock up for disaster!
at November 15, 2016