Bomb explodes outside the Brussels Institute of Criminology in Belgium: Conflicting reports! 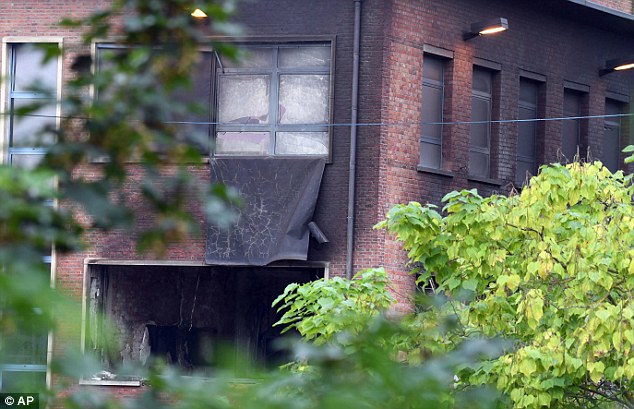 Photo AP
Belgium's Institute for Criminalistics and Criminology in Neder-Over-Heembeek in Brussels has been the scene of an attack.
Several attackers are believed to have been responsible for an explosion.
VRT News understands that the attackers poured fuel into the building and set it alight.
Two people have been arrested.
What exactly happened is not entirely clear.
Around 2AM a delivery van drove onto the site of the Institute.
Early reports spoke of an explosion, but now it is thought that there was no explosion, only a fire. The attackers are thought to have used the delivery van as a ladder to gain access to the building and pour fuel from a jerry can into it.
The van too was set alight.
Firefighters rushed to the scene to put out the flames.
There is considerable damage, but nobody was hurt.
No indications for terrorism yet
However conflicting reports are coming in...
The police claim there was no explosion while locals report of an extremely powerful explosion
One witness claimed.
"The explosion was extremely powerful."
"Windows of the lab were blown out."
The prosecutors' office declined to speculate on the cause of the explosion at the Institute of Criminology in a Brussels suburb.
Belgian media said the blast was caused by a car which rammed the building.
"The explosion was extremely powerful," said Meys. "Windows of the lab were blown out dozens of meters away."
He said about 30 firefighters were at the scene at around 3 am local time (0100 GMT) fighting the blaze.
The institute is part of Belgium's federal justice system.
Among its tasks is to carry out scientific analyses linked to criminal cases and to study the functioning of the penal system.
The explosion occurred with Belgium on high alert after suicide bombers struck Brussels airport and a metro station near the European Union headquarters on March 22, killing 32 people.


Home page
Related
UN Supplying migrants with a document on how to break the law in Europe which led to 21 being attacked on a train in Germany and the death of a young Swedish nurse
Tension building: Czechs and Hungarians call for European army: Germany wants compulsory national service: US backed Turkey invades Russian backed Syria
The Battle of Gog and Magog? Russia Iran and Turkey come together North Korea prepares for the "end" and German's are told to stock up for disaster!

World media trying to hide fact German killer was from a Muslim background
"Allahu Akbar" strikes again: Afghan refugee hacks 15 people with a knife and an axe in Germany
Mad dogs and English men: One month of madness in a world of hate
Breaking news....Turkish military, in statement, says it has taken over the country
Terror Attack In Nice: 83 people and 1 demonic dog killed during Bastille Day celebrations
at August 29, 2016