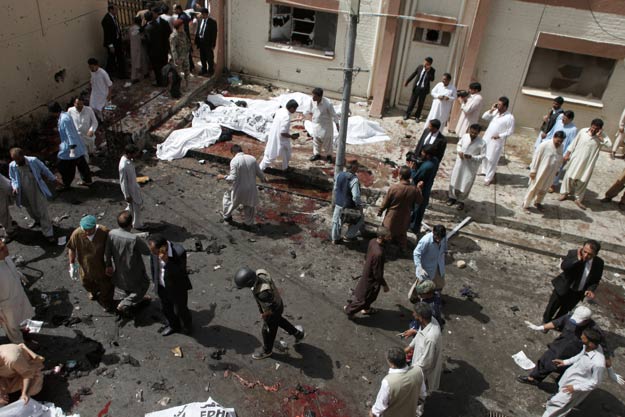 Photo tribune.com.pk
At least 63 people were killed and 56 injured when a loud explosion occurred on Monday in Quetta's Civil Hospital.
The explosion occurred when Balochistan Bar Association President Bilal Kasi's body was being brought to the emergency department.
He was gunned down at Mano Jan Road earlier today.
Former Balochistan Bar President Baz Muhammad Kakar was injured in the attack.
He later succumbed to his wounds at the hospital.
Police said that unknown men opened fire after the blast.
Panic tore through the hospital after the incident.
The blast occurred near the emergency department of the hospital.
Most of the injured are lawyers and journalists who had arrived at the hospital when they heard news of the attack on the two senior lawyers, eye witnesses said.
An Aaj News cameraman was killed in the attack while a Dawn News cameraman was severely injured in the attack.
Security forces have cordoned off the area.
Mobile phone jammer have been installed in the surrounding areas of Civil Hospital.
Emergency has been declared at hospitals in Quetta.
No group has claimed responsibility of the attack.
The provincial capital has been at the receiving end of several such acts of terror.
In May this year two people were killed and five injured when an explosion occurred at the main entrance of Baluchistan University.
Chief Minister Sanaullah Zehri claimed that the attack was carried out by Indian spy agency Research and Analysis Wing (RAW).
He added that it was a suicide attack.
Zehri said that the terrorists were attacking soft targets.
"Even in times of war no one attacks a hospital," he said, adding that they will root out terrorists.
The chief minister could not provide a death toll for the attack, but said that over 40 have been injured.
Prime Minister Nawaz Sharif condemned the loss of precious life and ordered the provincial government to arrest the culprits.
"No one will be allowed to disrupt the peace of the province," the prime minister said.
He added that security forces had laid down their lives to establish peace in the province.
He instructed the provincial government to give the best medical treatment to the injured.
The Supreme Court Bar Association announced a week-long mourning over the attack.
Lawyers in the Lahore High Court announced a protest demonstration today condemning the attack.

World media trying to hide fact German killer was from a Muslim background
"Allahu Akbar" strikes again: Afghan refugee hacks 15 people with a knife and an axe in Germany
Mad dogs and English men: One month of madness in a world of hate
Breaking news....Turkish military, in statement, says it has taken over the country
Terror Attack In Nice: 83 people and 1 demonic dog killed during Bastille Day celebrations
at August 08, 2016