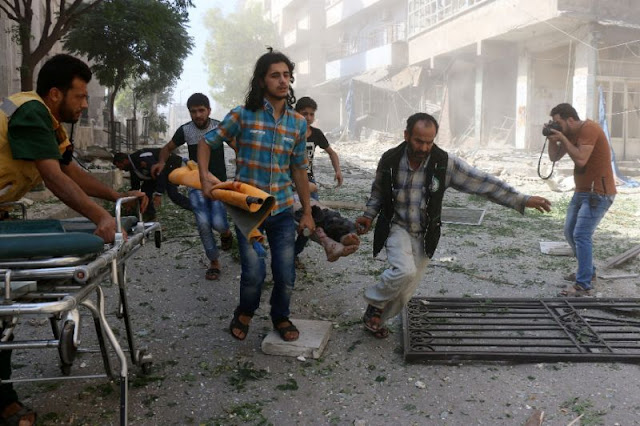 Photo www.yahoo.com
The United Nations warned Tuesday that more than 2 million people in the Syrian city of Aleppo have no access to running water or electricity, and it called for a halt to the fighting to repair the damaged infrastructure and deliver humanitarian aid.
"We have supplies ready to roll: food rations, hospital supplies, ambulances, fuel for generators, water supplies and more," U.N. humanitarian chief Stephen O'Brien told reporters in New York.
"We can deliver these within 24 to 48 hours if we have safe access."
U.N. agencies have repeatedly called for weekly 48-hour humanitarian pauses to provide desperately needed aid to Aleppo's residents and evacuate them, but these have not materialized.
O'Brien called on the U.N. Security Council to use its influence to make the pauses a reality.
Attacks this week have severely damaged Aleppo's electric and water infrastructure, while the main supply routes to both the eastern and western parts of the city have been cut in recent weeks, making an already severe humanitarian situation much worse.
Council diplomats were supportive of the humanitarian pauses, but it was not clear what immediate steps they would take to make them happen.
O'Brien warned that the humanitarian situation across the country is dire.
"Conditions across the rest of Syria are difficult and increasingly difficult," he said.
UNICEF spokesman Christophe Boulierac warned children and families in Aleppo are facing a catastrophic situation.
"These cuts are coming amid a heat wave, putting children in Aleppo at a grave risk of waterborne diseases," Boulierac said.
And that getting clean water running again cannot wait for the fighting to stop."
UNICEF warns Aleppo's residents face an increase of diarrhea and malnutrition among children unless water pumping is restored soon.
U.N. Syria envoy Staffan de Mistura also briefed council members.
In a private discussion held by video link, diplomats said de Mistura wants to restart the talks as soon as possible, but that the right environment must exist.
De Mistura said last month that he hoped to resume the third round of intra-Syrian talks at the end of August.
But the escalation in Aleppo has cast doubt on that possibility, with several western diplomats saying there could not be substantive negotiations without a stop to the fighting.
Russia's U.N. envoy, Vitaly Churkin, said that while Moscow hopes the situation in Aleppo will improve, "we do not believe that there need to be any preconditions" for talks.
Meanwhile, the Syrian government has reportedly sent several thousand reinforcements to mount a counterattack south of Aleppo, in a bid to recapture territory taken by rebel factions in recent days. Syrian state TV broadcast an urgent plea for volunteers, amid reports the army and its Lebanese Hezbollah allies were bringing in reinforcements to try to retake a strategic corridor south and west of Aleppo.
Heavy fighting took place along Aleppo's southern outskirts of Khan Assel, Khan Toman, Atareb and Sarmada, and there were reports of heavy government and Russian airstrikes of rebel forces defending a supply corridor into the city.
According to Syrian government media, the Syrian military and its militia allies stopped rebels from advancing through a destroyed housing complex south of the city, demolishing dozens of armed vehicles.
However, Hilal Khashan, who teaches political science at the American University of Beirut, discounted any major advance by the government or rebels in Aleppo.
"I don't believe that either side will prevail in the battle for Aleppo, despite the recent attack or the counterattack by government forces or their allies," Khashan said.
He argued that "a decisive victory by either party precludes the possibility for a negotiated settlement," and said "an equilibrium will need to be maintained, whereby all local allies will be losers and their regional and international backers will have to reach a negotiated settlement for the distribution of the spoils."