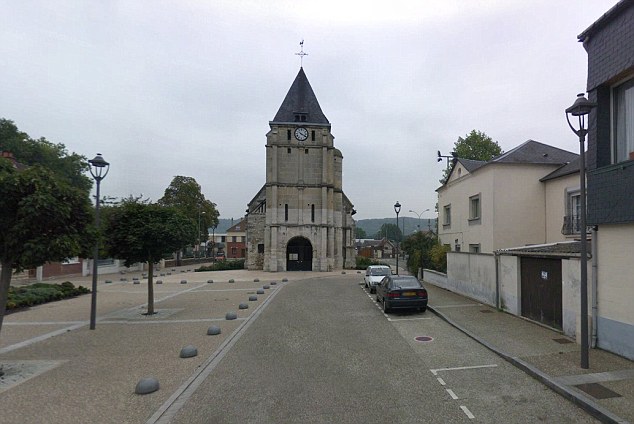 Photo Daily Mail
A priest has been killed in an attack by two "Islamic" knife men at his church near Rouen in northern France, police and French media have said.
The armed men entered the church in Saint-Etienne-du-Rouvray during Mass, taking the priest, two nuns and several churchgoers hostage, reports said.
French TV said shots had been heard after police arrived at the scene.
Both hostage-takers are now dead.
The area has been cordoned off and police have told people to stay away.

At least one person is receiving medical treatment for injuries.

World media trying to hide fact German killer was from a Muslim background
"Allahu Akbar" strikes again: Afghan refugee hacks 15 people with a knife and an axe in Germany
Mad dogs and English men: One month of madness in a world of hate
Breaking news....Turkish military, in statement, says it has taken over the country
Terror Attack In Nice: 83 people and 1 demonic dog killed during Bastille Day celebrations
at July 26, 2016