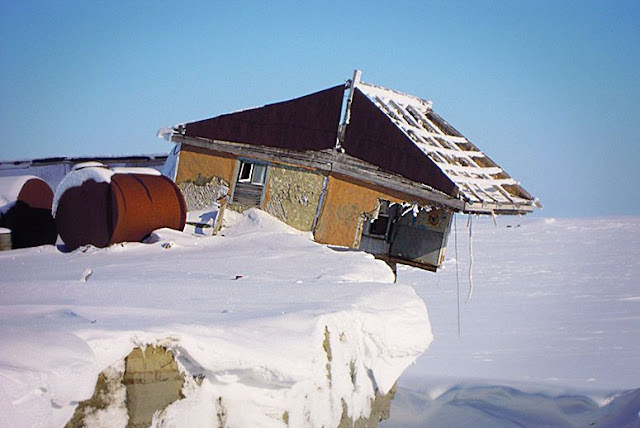 Photo www.takepart.com
Conservation activists in Russia have documented a dramatic state of erosion along the coast of a remote Arctic island that is home to polar bears, walruses, and other wildlife.
The coastline of Vize Island retreated more than 240 feet in just seven years, according to World Wildlife Fund Russia, faster than any other area of coastal erosion in the Russian Arctic.
The 112-square-mile island sits between Severnya Zemlya and Franz Josef Land at the northern end of the Kara Sea.
"Vize Island is melting into the surrounding waters at an alarming rate," the group stated in a statement, because of "the erosion of permafrost coasts by waves," which are becoming more destructive as protective summer sea ice decreases around the island.
"An analysis of Landsat satellite images over the past years has revealed an increase in the period of open water due to global warming."
An image from July 2016 shows no floating ice around Vize Island, compared with a 2009 image showing much more summer sea ice in the same waters.
According to the National Snow and Ice Data Center, summer sea ice in the Kara Sea is "far below average" this summer, while overall Arctic summer sea ice hit its third-lowest July extent in more than 30 years of satellite record keeping.
The rapid erosion has left an old Soviet-era weather research station, which sat for more than half a century at a safe distance from the water's edge, hanging over a steep cliff.
Around a half-dozen staffers live in a 2011 addition to the station that sits farther back from the eroding coastline, Ivan Mizin, a Murmansk-based staffer for WWF Russia, said in an email.
The extreme erosion on Vize Island is another sign of climate change's intensifying toll on the Arctic, a region that is home to around 4 million people, many species of charismatic ice-dependent wildlife, and the fastest-rising temperatures on Earth.
In the American Arctic, several coastal villages, including Kivalina, Alaska, have been grappling for years with heavy erosion of their shorefronts as permafrost melts and sea ice vanishes, with some communities seeking funds and government support for relocation within the next two decades.
Last August President Barack Obama visited Kotzebue, Alaska, another village anticipating a forced retreat from the Arctic Ocean because of climate change.
The effects of the great Arctic thaw on wildlife are also increasingly visible.
The population of Pacific walrus is dropping as the region's walrus carrying capacity diminishes along with its ice cap. Research published in February documented that polar bears are expending more energy, compared with 20 years ago, to find the same amount of food-a nutrition gap caused by the loss of Arctic sea ice, their ideal hunting ground. Scientists recently reported that higher Arctic temperatures are causing a knock-on series of impacts that have stunted the growth of a migratory bird species called the red knot, which nests in the Russian Arctic. This has led to a rising death toll among red knots farther south, in their tropical overwintering habitat, because the smaller birds have less success foraging for food.