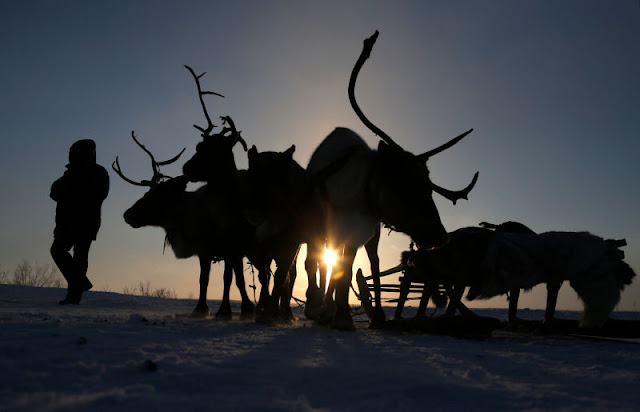 Photo today.ddns.net
The Russian military are assisting the local authorities in dealing with a deadly anthrax outbreak.
The occurrence in western Siberia has already killed 1,500 reindeer, which are used as livestock by the indigenous people.
The Russian Air Force is surveying the area in the Yamalo-Nenets Autonomous Area affected by the anthrax outbreak in preparation for the deployment of biohazard troops.
Transport planes have delivered 200 personnel, some 30 all-terrain vehicles and all the necessary supplies for the decontamination mission, which is mostly disposing of carcasses of animals killed by the lethal disease, to the region's capital Salekhard.
The response comes after anthrax was confirmed to be the cause of death of some of 1,500 reindeer, who died in Yamal over the past weeks.
The governor declared a state of emergency on Monday, when numerous reports of the mass deaths of livestock started to surface.
The affected area was quarantined and 12 families of reindeer herders were evacuated.
Of the 63 people 40, mostly children, were sent to hospital for preventive treatment.
Anthrax can be lethal in roughly a quarter of patients unless treated with antibiotics, but is rarely fatal under proper medical supervision.
So far none of the patients have contracted the disease.
The mass vaccination of both people and animals that are at high risk of infection was ordered in the area.
The neighboring Tyumen region sent health specialists to Yamal to speed up the vaccination effort. As of Friday, all reindeer have been vaccinated and the veterinarians had switched to other animals, the governor's office said.
The biggest challenge the operation is facing is logistics.
Yamal is Russia's fifth-largest region, with an area comparable to Turkey and bigger than the US state of Texas.
Half of the region is above the Arctic Circle while the area is mainly made up of permafrost planes, cold swamps and taiga forests.
This is the first outbreak of anthrax in Yamal since 1941 and is likely to have been caused by an extraordinary heat wave.
The temperature average for July is around 17 degrees Celsius.
However, this month, the temperature has climbed to as high as 35 degrees.
A number of the reindeer have died from overheating, rather than from anthrax.
It is believed the extreme heat melted part of the permafrost where a reindeer was buried after dying from the disease over 70 years ago and anthrax was subsequently released into the atmosphere. Anthrax bacteria can lay dormant for decades or even centuries in spore form while retaining viability.
The spores are very difficult to eradicate and are more dangerous when inhaled compared to infecting the skin, which gave anthrax a prominent place in history as a bioweapon.
One of the most famous cases of anthrax being used as a biological weapon came in the US in 2011 during a series of letter attacks, which killed give people and infected another 17 people.