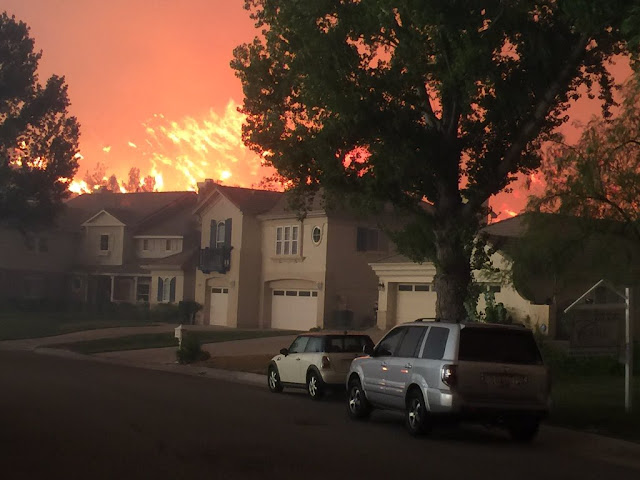 Photo www.breakingnews.com
A wildfire blazing 35 miles north of Los Angeles has grown to 20,000 acres, prompting hundreds of mandatory and voluntary evacuations.
The so-called Sand Fire near Santa Clarita started as a brush fire Friday afternoon and was 10% contained Saturday.
About 300 people had been evacuated Saturday and evacuation orders or recommendations have been issued for residents of 1,500 homes, the Los Angeles County Fire Department said.
Authorities earlier said it covered 11,000 acres but on Saturday night the Angeles National Forest tweeted that it had grown to 20,000.
Fighting the fire -- named for the area's Sand Canyon -- is a challenge, said Nathan Judy, fire information officer with the Angeles National Forest, because of the rugged terrain and the 10- to 20-mph winds blowing the fire toward the populated part of the county.
"It's hot right now, 85-degree temperatures, and we are looking at getting into the 100s today with no humidity," Judy said.
"The fire is burning in multiple different directions.
To the east, it is burning more into the forest and uninhabited areas and to the west is our main concern because (the winds) might make it push down to the flat country.
That's where we have structures and residents."
Judy said one structure has been destroyed so far, but he had no details on whether it was a home or an outbuilding.
More than 300 firefighters are battling the fire and one firefighter suffered a minor hand injury Friday, Judy said.
Approximately 300 homes are under mandatory and voluntary evacuation orders and shelters have been established for residents and large animals.
"There is a large horse population out here, that's why we have the large animal shelter available," Judy said.
The Santa Clarita area is under a "red flag warning" issued by the National Weather Service, meaning weather conditions and dry vegetation are combined for what the weather service calls "extreme fire danger and/or fire behavior."
Meanwhile, the Soberanes Fire near Big Sur has grown to 2,000 acres and also forced evacuations. Ellen Masten was one of the long-time residents who had to leave.
"The first thing you think is, 'What's important?'" she said.
"What should you take, what can't you live without?
You look around the house and you say, as much as you love those beautiful plates and those things on the wall, what's really the most valuable thing?
I grabbed all the pictures of the kids and then I took the paintings of my parents that had been done by a local artist."
Authorities issued a voluntary evacuation notice Saturday for the Carmel Highlands area.
Mandatory evacuations have been ordered for the Palo Colorado neighborhood of Northern Big Sur. The fire was sparked Friday and is burning 5 miles south of Garrapata State Park.
Cal Fire helicopters spent all day flying back and forth between the ocean, where they collected water, and the mountain ridges at the park, where they dropped the water.

Home pageRelated
Huge deposits of Uranium killing many people in Nigeria who are blaming the death's on "evil spirits!"
Ukrainian MP Andriy Artemenko claims Khmelnytsky plant nuclear fuel leak cover upA smelly, "guacamole-thick" muck is terrorizing Utah water killing animals and poisoning hundreds of humans
Deadly algae bloom at Utah Lake is the worst ever seen as bloom's grip America from California to Florida
Worst ever toxic algae bloom's which can kill affecting waters around the US
It killed 30–60% of Europe's total population: A ten-year old Siberian boy has contracted the bubonic plague
'Forget "Brexit," it's the Italians stupid!' "PANIC" BUYING OF FOOD IN NEW JERSEY?
Media guilty of not reporting massive rise in deaths from H1N1 influenza in Brazil
El-Niño brings Australia's delicate ecosystem to it's knees: Barrier Reef, Mangroves and Kelp forest all in danger
Over 66 million trees dead in California (Up from 3.3 million in 2014) causing even greater fire risk
Southern California Gas report another methane leak at Porter Ranch
at July 24, 2016