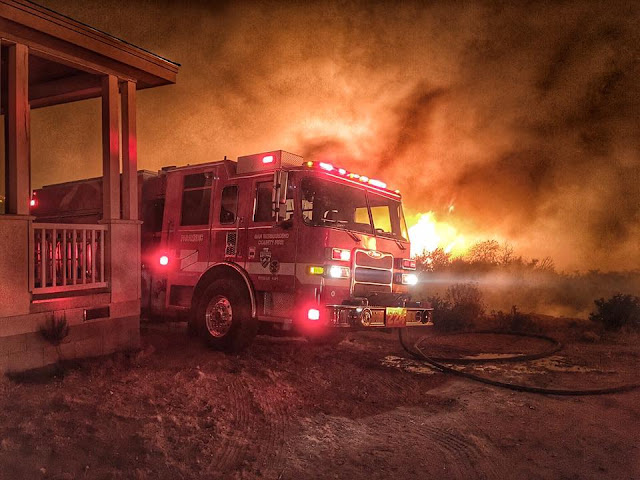 Photo wildfiretoday.com
A wildfire in the mountains of San Bernardino County grew to more than 7,700 acres Tuesday, threatening thousands of homes and forcing schools to close, as crews across the state battled raging blazes in the late summer heat.
The Pilot fire has scorched 7,736 acres and is 6% contained, according to the U.S. Forest Service. About 5,000 homes were under voluntary and mandatory evacuation orders, according to Bob Poole, a spokesman for the forest agency.
Since the fire was reported about noon Sunday, the flames have spread quickly, chewing through dry brush amid sweltering heat and rising humidity.
On Tuesday, winds ranging from 10 to 15 mph — with gusts of up to 25 mph — fanned the blaze. Much of the fire’s growth of more than 700 acres Tuesday was driven by active winds, reports L A Times.
Smoke plumes roiling from flaming ridges of the San Bernardino Mountains blew all the way across the Mojave Desert to Las Vegas as California's latest big wildfire forced the evacuation of hundreds of homes and threatened thousands more in the US.
Hundreds of firefighters, aided by 16 aircraft, battled flames that spread across nearly 25 square kilometres on the northern side of the rugged mountain range east of Los Angeles.
People in some 375 homes were ordered to evacuate, San Bernardino County sheriff and US Forest Service officials told the Los Angeles Times.
About 5000 more homes were advised that they may want to evacuate, authorities said.
Helicopters sucked loads of water from nearby Silverwood Lake to douse flames leaping across slopes.
Air tankers swooped low to paint the dry vegetation with pink fire retardant.
The fire, which erupted for an unknown reason Sunday (Monday NZT), was just 6 per cent contained.
Across the Mojave, officials in southern Nevada issued an air quality advisory because of smoke from the fire more than 200 miles away.
The Clark County Department of Air Quality said the air was unhealthy for sensitive groups, including young children, senior citizens and people with respiratory problems and cardiac disease. Like some of the state's other fires this summer, the blaze burned near a popular recreation area.
But Silverwood Lake's waters had been closed to swimming, fishing and boating since August 4 because of an algae bloom.
On the central coast, meanwhile, California's biggest fire expanded to more than 246 square kilometres north of scenic Big Sur.
An army of more than 5000 firefighters and an air force of tankers and helicopters made progress, however, surrounding 50 per cent of the 18-day-old blaze.
Firefighters set fires to burn out vegetation between the main body of the fire and prepared control lines.
Long-suffering residents of Palo Colorado who had been under evacuation orders since late July were finally being allowed to return.
Some evacuation orders remained in place, while others were reduced to warnings.
Five state parks on Highway 1 between San Francisco and Los Angeles remained closed.
The fire, which has destroyed 57 homes, damaged three others and led to the death of a bulldozer operator in an accident, was caused by an illegal campfire.