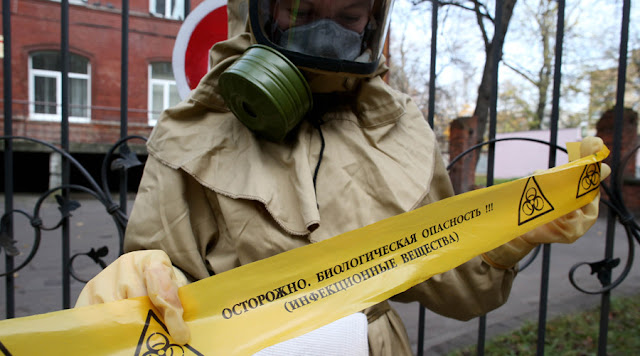 Photo www.rt.com
A total of 86 people, including 51 children, in the Yamalo-Nenets District area affected by the anthrax outbreak known as the 'Siberian plague' are under observation in hospital, spokeswoman for the district's governor Nadezda Noskova said on Tuesday.
On Monday, a 12-year old child died after being diagnosed with anthrax in Russia's northwest Siberian Yamal Peninsula.
According to the Yamalo-Nenets Autonomous District's authorities, the child was among nine people who were tested positive for anthrax.
There are 86 patients from the quarantined area and nearby localities currently in the Salekhard's infectious department.
51 of them are children, since it was decided to first admit the children to the hospital.
There are also 4 patients including 2 children in the infectious department in the Yar-Sale [village]," Noskova told RIA Novosti.
According to Noskova, the treatment and observation of all the people affected by the disease continues.
Last week, the massive death of reindeer, nearly 2,000 in Yamal peninsula was reported due to the unusually hot summer for this area, which could have triggered the long-dormant bacteria to become active, according to scientists.
Anthrax is an infection caused by the Bacillus anthracis bacterium and most of its forms can be lethal if inhaled.
Some forms of the disease respond well to antibiotic treatment and effective vaccines against anthrax exist.
Meanwhile, in Sweden...
Swedish authorities are investigating an anthrax outbreak at farms in central Sweden.
Eight cattle and a horse on separate farms near Omberg in the ostergotland region have died from splenic fever, as it is also called, after the first case of anthrax was confirmed by agricultural experts last month.
They are located a couple of kilometres apart, and officials from Sweden's National Veterinary Institute are currently working on vaccinating livestock and tracing the source of the infection.
"It is of course a loss to the owner of the animals and a concern for the surrounding area.
We know that there is an increased risk that each case could spread locally," Karl Stahl told the Swedish newswire TT.
It has not been confirmed what caused the outbreak, but there have been other incidents in the region during the 20th century.
An elk which was found dead in the area in 1927 carried the infection, according to the National Veterinary Institute.
Traces of the bacteria that cause the infection can survive for decades.
"Back in the days so-called anthrax graves were common.
You simply dug a hole for the cows that died and in connection with earth works the infection could spread again, but it could also be because of infection from wild animals," said Stahl.
Authorities are urging people to report dead deer or elk to the Swedish Board of Agriculture.