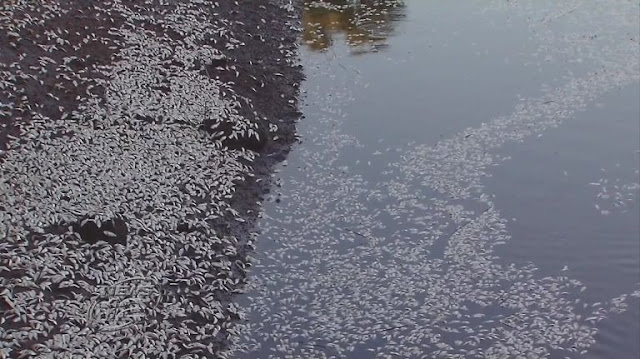 Photo newjersey.news12.com
The borough has been cleaning up dead fish for three days in a fish kill that is now estimated to be in the millions of fish.
What is strange, very strange is, the peanut bunker fish are salt water fish and Waackaack Creek is fresh water?
Mayor George Hoff said the public works department is using a beach rake vehicle and front end loaders to pick up the tiny peanut bunker off Keansburg beach as they wash out from Waackaack Creek.
They are then tossing them in dumpsters.
From there the fish are being driven to the Monmouth County landfill in Tinton Falls where a large hole is being dug.
"The idea is to get them in the ground and cover them as quickly as possible to reduce the smell," said Laura Kirkpatrick, county spokesperson.
The cost to dump animal waste in the landfill is $109 per ton. 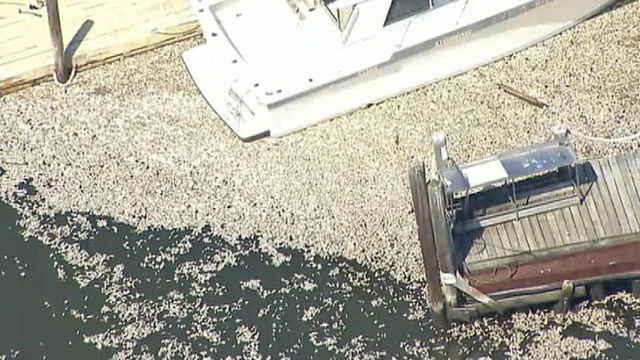 Photo www.fox5ny.com
Peanut bunker, the young of menhaden, an oily bait fish that plays a crucial role in the marine ecosystem, typically weigh a few ounces each.
They started to die in large numbers on Saturday due to low dissolved oxygen levels in the water, officials from the state Department of Environmental Protection said.
The highest concentration was in the Waackaack Creek, which feeds Raritan Bay.
Officials from the DEP said the creek can get stagnant during certain tides and with so many fish concentrated in a small body of water, the fish deplete the oxygen.
The result has been a fish kill that has been a little unpleasant at times.
"When the tide goes out and they're soaking in the sun there's some odor.
It was little overwhelming (Tuesday).
You could smell the fish when the wind changed off the bay," said Hoff. William Mefi, owner of Williams Auto Repair on Laurel Avenue which is located a few hundred yards back from the mouth of the creek, said this is the first fish kill on the Waackaack he's aware of.
He said the odor has not been too unbearable.
"I've been here 10 years and I've never seen it before," he said.
"The tides coming in now and there are a lot of fish floating on top of the creek."
Hoff estimates they will be done by Thursday, barring any further die-off.
He said the borough hasn't needed to use overtime hours in the clean up. Hazlet, which shares a border on the Waackaack, is involved in the effort to remove the dead fish.

thank you for your interesting infomation. http://7-min.com/himalayan-salt-water-flush-recipe/