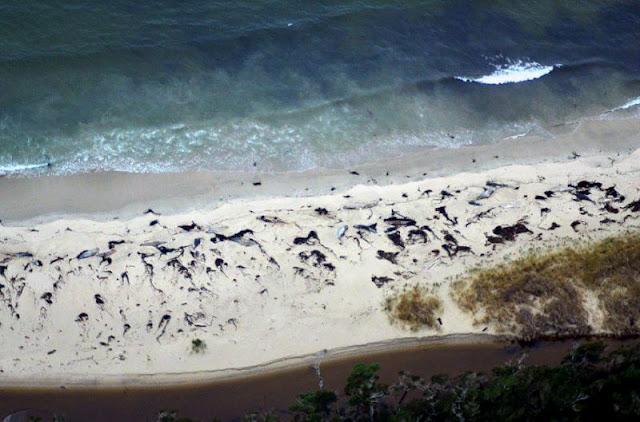 Dead whales found in the Chilean Patagonia seashore, near the port of Aysen on July 18, 2016 (AFP Photo/)
Translated from Spanish
About 70 whales were found dead in southern Chile less than a year after the mass stranding of more than 330 cetaceans found in another sector of the Chilean Patagonia, the National Fisheries Service (Sernapesca).
The animals were detected about six hours by boat from Puerto Chacabuco, Aysén region, and its size was discarded belonging to the same species (Sei) of more than 300 whales beached in late 2015. "They're smaller than we saw before, about 60 to 70 whales, which are in a much more accessible," and will allow an inspection process in the coming days, said director of Sernapesca, José Miguel Burgos.
Death of the whales dates from more than two months ago, authorities said.
The bodies are "still intact, so we are optimistic to perform necropsies, taking appropriate samples" to determine the hypotheses of the stranding.
In the first mass beaching -due to the precariousness of the samples obtained, by the age of the remains, to the time of his hallazgo- it was difficult to determine an exact cause red tide being the most likely causal death.
In the new stranding "the first thing we have to devote ourselves is whether or not human intervention," said Burgos.

"This is our Deep Water Horizon!" Florida's Atlantic coast a state of emergency as massive algae blooms attack North American waters
at July 25, 2016