Corexit to blame for the death of thousands of fish on Trinidad and Tobago: Fish had burst blood vessels 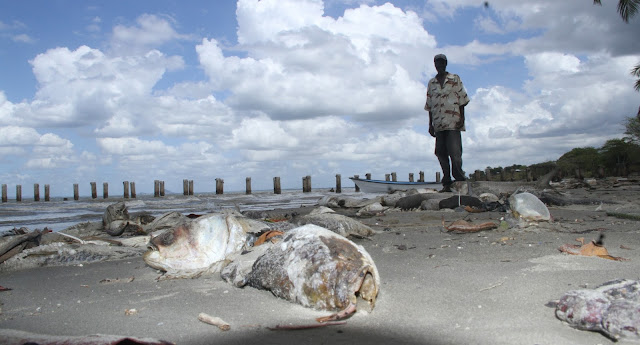 Photo www.guardian.co.tt
Secretary of Fishermen and Friends of the Sea (FSOS) Gary Aboud is disputing the findings of the Environmental Management Authority (EMA) and the Institute of Marine Affairs (IMA) about the fish kill in the Gulf of Paria.
During a two-hour boat tour of the Gulf, which began at the mouth of the Godineau River to the Aripero Wetlands, with members of the media yesterday, Aboud said the thousands of dead fishes seen at sea were fresh kill.
"We went on a mission to verify what the EMA?and the IMA said," Aboud said.
"But we saw thousands of dead fishes that have lesions on them, they have burst blood vessels and there were a variety of shapes and sizes we saw here today."
On Thursday, the two agencies sent out a joint press release stating the dead fishes which had been washing ashore in the Gulf since Monday were dumped by fishermen.
The release stated the fishes-herring, catfish and mullet-had red marks about their bodies which indicated they were trapped in a net.
But Aboud said the lesions were a symptom of exposure to the chemical Corexit, which was used in the Gulf during the 2013 oil spill.
In early 2014, Petrotrin had cordoned off an area in the Gulf and paid fishermen compensation to stay away from the contaminated area.
"We believe the lesions are being caused by the Corexit.
This area where all of the dead fish are is the exact same area where the Corexit was used; these fishes have no net marks on them.
"If it is there were other influences, it is highly coincidental the other influences would occur in the same zone, the Petrotrin Red Zone, which Petrotrin had barred off and stopped people from fishing." Activist Edward Moodie, who organised the tour, and the fisherman who captained the boat, examined the fishes and also declared them fresh kills.
"These fishes would have died overnight, as their gills were still red and their bodies had not started to decompose yet."
Both Moodie and Aboud renewed their calls for the EMA?and IMA?to properly investigate the fish deaths and for Government to get involved to ensure the agencies carried out their duties responsibly.

20,000 dead fish wash ashore at at a Trinidad creek with maybe 5 times more at the sea bottom

"This is our Deep Water Horizon!" Florida's Atlantic coast a state of emergency as massive algae blooms attack North American waters
at July 24, 2016