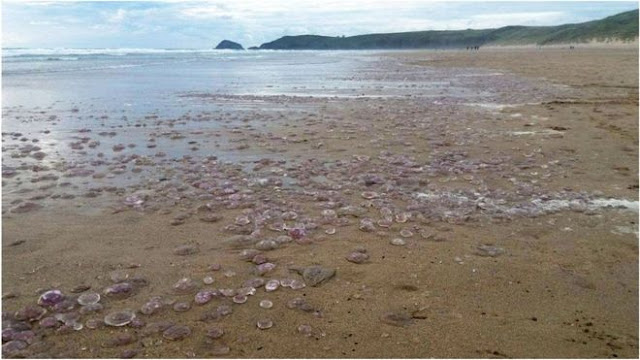 Thousands of jellyfish have washed up on a Cornish beach just days after a sperm whale got stranded and died at the same place.
Marine specialists say the current onshore winds are bringing in large numbers of jellyfish from the Atlantic.
The jellyfish, known as moon jellies, which used to be rare in Cornish waters, do not have a painful sting.
On Sunday, a female sperm whale was discovered in the shallows on Perranporth beach.
Matt Slater, from the Cornwall Wildlife Trust, said:
"It's shocking the amount of jellyfish which are turning up.
"There are millions of jellyfish in our waters at this time of year.
When I'm out surfing, I keep hitting them with my board."
He added moon jellies were rare in Cornish waters five years ago, but they now seem to be abundant at this time of year.
There could soon be sightings of leatherback turtles - the largest turtles in the world - as these feed on jellyfish, he said.
Christian McConville, from the Plymouth Marine Laboratory, said: "Jellyfish do not have a tremendous amount of control over movement.
"It's likely the prevailing wind drew them to the coast and the tide left them on the beach." He said this is the first major stranding event that he has seen this year.

"This is our Deep Water Horizon!" Florida's Atlantic coast a state of emergency as massive algae blooms attack North American waters
at July 15, 2016