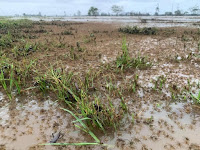 Monday, 22 March 2021 Unlivable Series! Just over a year ago today the worst bushfire season ever recorded came to an end in Australia. This year the fires have been replaced with a "mega plague" of mice spreading disease and damaging crops along with a "Once In A Generation Flood!" 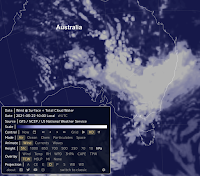 Just over a year ago today the worst bushfire season ever recorded came to an end in Australia. The true extent of consumed forestry was found to be truly astonishing. Researchers at Western Sydney University’s Hawkesbury Institute for the Environment have analysed historic data on the extent of Australia’s extraordinary forest fires and found that the area burned in Australia during the 2019-2020 forest fires was an astounding 21%.

Previous "major fire" seasons have historically been around 2% of Australian forests consumed by fire. 3 billion animals were killed or injured during the unprecedented fires. The fires have gone this year but have been replaced by a Biblical plague of mice and what is being called a "once in a generation flood." Australia, farmers and people living in NSW rural communities are crying out for help to deal with an escalating mice plague that's threatening their health as well as the winter crop.

Sunday, 21 March 2021 The Most Important Decade In The History Of Mankind! “Now learn this illustration from the fig tree: Just as soon as its young branch grows tender and sprouts its leaves, you know that summer is near.

“Now learn this illustration from the fig tree: Just as soon as its young branch grows tender and sprouts its leaves, you know that summer is near.

Available data from the Food and Agriculture Organisation released in March 2021, shows us that an increased occurrence and intensity of disasters is the new normal. Within the first few months of 2020, huge swarms of desert locusts began ravaging countries across the Greater Horn of Africa, the Arabian Peninsula, and Southwest Asia - just one more hit to farmers already impacted by floods, cyclones, hailstorms, animal diseases, droughts, and other shocks.

Thursday, 18 March 2021 "Unlivable!" The expected mass exodus is beginning: In the last six months more than 12 million people have been displaced with 80% of these displacements were caused by weather disasters: In 23 days of January 2021 Indonesia suffered 185 disasters

The expected mass exodus is beginning. A new report reveals more than 12 million people have been internally displaced around the world since September 2020 mainly due to climate and weather-related disasters. In just 6 months, 12.6 million people, more than the population of Belgium have been displaced around the world. In just 23 days during January 2021, Indonesia suffered 185 disasters including two major earthquakes, seven volcano eruptions with a further 3 showing activity, as well as deadly tornadoes, landslides and floods killing and injuring thousands and displacing many more. These figures released two days ago by the Red Cross show just how desperate life is becoming for many people around the world thanks to increasing extreme weather events.
Kuala Lumpur, 16 March 2021 – The new report reveals 12.6 million people have been internally displaced around the world in the last six months mainly due to climate and weather-related disasters, according to data available through the Internal Displacement Monitoring Centre.
Tuesday, 9 March 2021 "UNLIVABLE!" In the winter of 1962-63 something incredible happened in the UK. The entire British Isles was plunged into a “Day After Tomorrow,” mini-ice-age; 60 years on these once in a lifetime events are happening almost monthly worldwide

Yesterday the American government-run National Oceanic and Atmospheric Administration, (NOAA) released their monthly national report on the American weather which covers last months coldest February in more than 30 years and the record-breaking freeze which caused many parts of the country, especially Texas, to become, "unlivable!"
It was a brutally cold month for Texans: February 2021 brought the coldest air since December 1989 to much of the state. Several locations across central Texas — including Austin and Waco — broke records for the longest streak of below-freezing temperatures. Every county in Texas was under a Winter Storm Warning in mid-February and experienced wind chill values below zero as far south as the Rio Grande River and northeastern Mexico.
Thursday, 25 February 2021 Unlivable! Our Environment Is Collapsing Just As Severely As Our Society; Starving, cold and dying! Dead birds on sidewalks, frozen Alligators, massive fish die-offs, dead Deer and Antelope, Butterflies and plants the true cost of the Texas cold

I read somewhere that to really understand something is to be liberated from it. Yet, how can we liberate ourselves from our vain attempt at global progress which is, in all intents and purposes, destroying the very place in which we live?

Our world is collapsing, an implosion on a scale unimaginable just a few years ago. Without a doubt, if we continue on our current path we will lose our home and everything in it. Mankind’s environment is collapsing just as fast as its society. Planet Earth’s resources are dwindling at an alarming rate. Animals, plants, fossil fuels, minerals, water, air and soil are all diminishing at an unsustainable speed while the world’s population is increasing. If our natural world can no longer support our basic needs then our civilisation will quickly descend into chaos.