July 2021 will be a month to remember! Oregon on the verge of suffering its biggest wildfire ever: Nearly 100 wildfires raging across 13 states in the US: Wildlife taking the brunt: 2 million acres burning across the Siberian Tundra! 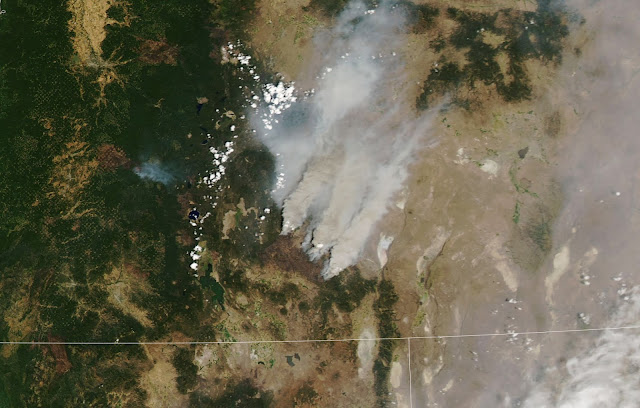 Earlier in the month, it is thought more than 1 billion seashore animals died along the Salish Sea in British Columbia, Canada due to a record-breaking heatwave there. In parts of southern Canada and the west coast of the US, temperatures nudged, 50 deg C, 122 deg F.

On the eastern side of the US, scientists are trying to find out just what the mystery disease is which is killing songbirds in their thousands. The disease was first recognized in the Washington DC area in May, since then countless birds have died leaving scientists scratching their heads.

Tampa Bay this month has been anything but a paradise, last week officials had to clean up more than 600 tons of dead fish which had died of red tide with residents having to endure breathing problems and sore eyes as well as a disgusting smell. It is only 3 years ago Florida suffered its worst red tide event ever when thousands of tons of marine life died. The red tide has never really gone away.

Last week an early heatwave in Baja Sur, Mexico caused the deaths of "thousands of tons" of sardines and other marine life. According to officials nearly 20 km of coastline and the event was unprecedented in size.

In Brazil, around 2,300 animals and 8,000 endemic plants are at high risk of extinction due to the destruction of the Amazon rainforest, according to a scientific report published last Wednesday. 35% of the Amazon rainforest has already been deforested or degraded. Produced by the Science Panel for the Amazon (SPA), the 33-chapter report brings together research on the world’s largest rainforest from 200 scientists from across the globe. Some of the animals that live in the Amazon Rainforest include jaguars, anteaters, sloths, river dolphins, macaws, anacondas, glass frogs, iguanas, harpy eagles, poison dart frogs and thousands of other animals, including birds, reptiles and fish species. Cutting deforestation and forest degradation to zero in less than a decade “is critical,” the report said. 18% of the Amazon rainforest has already been deforested, according to the report – primarily for agriculture and illegal timber. Another 17% has been degraded.

Meanwhile, in Europe, survivors of Germany's record-breaking flooding in the southwest are blaming top officials for not warning the people before the disaster struck. As the clean-up starts the German people are blaming top officials for the deaths of nearly 200 people. In many parts of the country, there is still no gas or electricity and could take "months" to put right. Belgium, Netherlands, Switzerland, and Austria all suffered a similar record-breaking deluge in one of the worst flooding seen in Europe.

A drought in Turkey is thought to be responsible for the deaths of thousands of baby flamingos. Drone footage shows thousands of dead chicks and infants buried in dry mud in the central province of Konya, with environmentalists blaming the deaths on climate change.

As fires rage across the northern Siberian tundra, Russia's Defense Ministry has sent planes and helicopters to help douse the blazes. A heat wave and strong winds are complicating firefighting efforts. Russian on Wednesday deployed military aircraft to help some 2,000 firefighters on the ground who are battling wildfires raging across almost 800,000 hectares (roughly 2 million acres) in Siberia. The Defense Ministry said it had sent Ilyushin II-76 transport planes to the Sakha-Yakutia region to water-bomb fires. Military helicopters were also used to transport firefighters and carry out reconnaissance flights to locate the worst fires. The Russian agency responsible for fighting forest fires, Avialesookhrana, said on Tuesday that the situation was worst in Yakutia, where 144 fires are burning over 578,000 hectares. In all, there are some 300 blazes raging in Siberia. The help from the military came after local residents petitioned President Vladimir Putin to send more resources and equipment to help put out the fires.