Climate Chaos! According to the British Prime Minister, humanity needs to "grow up" and deal with the issue of climate change! But are we too late, ecosystems around the world are collapsing, animals are dying at an unsustainable rate, crops are failing, oceans are dying and our vegetation is burning. 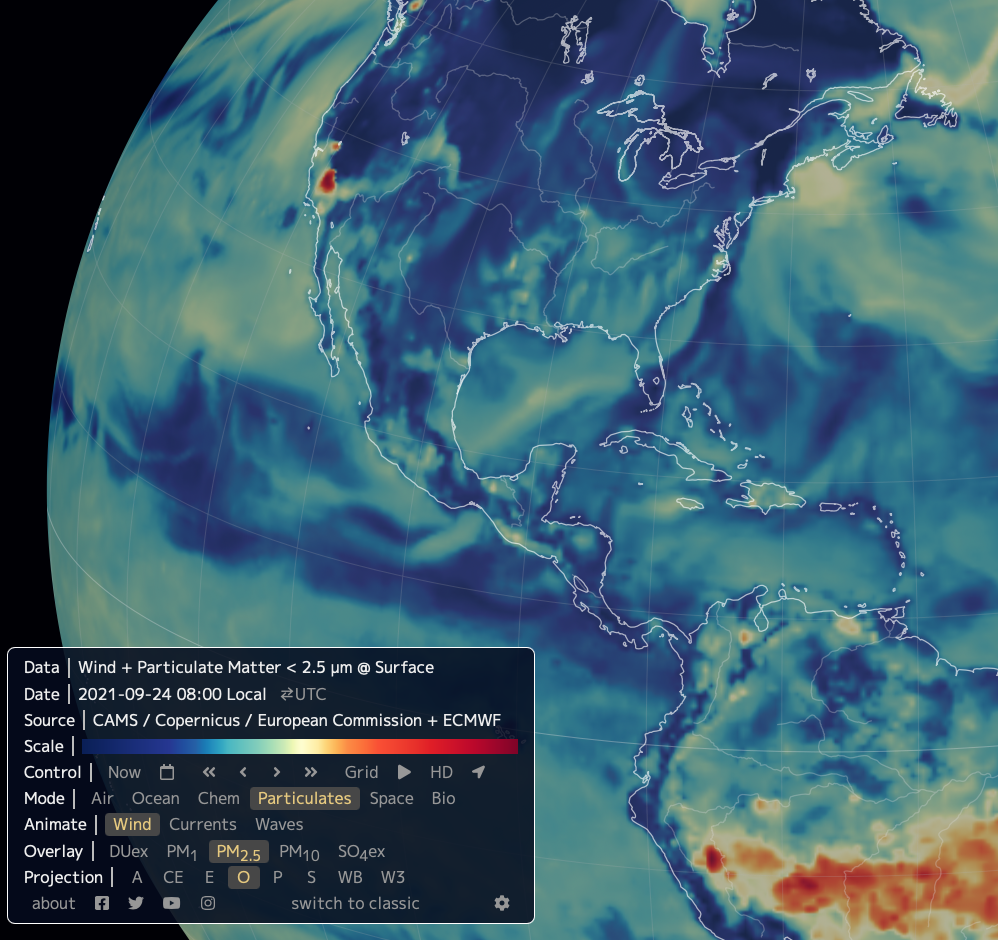 Earthwindmap showing harmful PM2.5 Particulates being released by wildfires into the air from fires in the Amazon and California.

So far this summer the Northern Hemisphere has probably reached a new level in wildfires with Europe's Copernicus Atmospheric Monitoring System, (CAMS) claiming the number, size, persistency and intensity have been remarkable.

Out of control wildfires have been raging in northeastern Siberia since June and are still burning in many areas. North America has had an unprecedented year with the usual suspect California crippled by wildfires for the 5th year on record and no end in site but also Canada and the Pacific Northwest have also being ravaged.

Mediterranean countries have seen a massive uptick in wildfires this summer too with Greece, Spain and Italy all suffering horrendous wildfires and the season is not officially over.

These wildfires are not going away, they are increasing with devastating strength annually as climate chaos warms the planet, with summer in the Northern Hemisphere cooling down the Southern Hemisphere will burst into wildfire action, Australia, Indonesia and the Amazon, all are surely in for devastating bushfire seasons.

According to GFAS data, August was a record month for fires, releasing an estimated 1384.6 megatons of CO2 globally into the atmosphere.

Arctic wildfires released 66 megatons of CO2 between June and August 2021.

Estimated CO2 emissions from wildfires in Russia as a whole from June to August amounted to 970 megatons  with the Sakha Republic and Chukotka accounting for 806 megatons.

“It is concerning that drier and hotter regional conditions - brought about by global warming - increase the flammability and fire risk of vegetation. This has led to very intense and fast-developing fires. While the local weather conditions play a role in the actual fire behaviour, climate change is helping provide the ideal environments for wildfires. More fires around the world are anticipated in the coming weeks, too, as the fire season in the Amazon and South America continues to develop,” said Mark Parrington, Senior Scientist and wildfire expert,

The wildfires came as the Northern hemisphere experienced its second warmest summer on record, tied with 2019 and slightly behind summer of 2020.

The Northern Hemisphere land-only summer temperature was the highest on record, besting the now-second highest set in 2016 by 0.20°C (0.36°F), according to the U.S. National Oceanic and Atmospheric Administration.

According to the BBC, the Mediterranean heatwave, which has seen some countries record their highest temperatures in decades, has led to the spread of wildfires across southern Italy, with Sicily, Calabria and Puglia the worst-hit regions. Separately, wildfires are continuing across Greece, fuelled by strong winds and parched vegetation. Foreign teams are helping to tackle blazes in what Prime Minister Kyriakos Mitsotakis has described as a "nightmarish summer".

The high temperatures in Portland this summer, part of a usually temperate region, has broken k

all-time records. Due to Covid and other problems, more people are experiencing homelessness, a population vulnerable to extreme heat.

Across the pond, Spain and Portugal suffered a heat wave that has already wreaked havoc in southeastern Europe, especially in Greece. A heat wave fueled by the hot air in North Africa has already swept across the Mediterranean region, triggering wildfires in Italy, Turkey and Algeria, where dozens of people have lost their lives.

According to a speech by the British Prime Minister, humanity needs to "grow up" and deal with the issue of climate change, Boris Johnson told world leaders at the United Nations General Assembly in New York on Wednesday. Johnson, a last-minute addition to the speakers' list that day, slammed the world's inadequate response to the climate crisis and urged humanity to "listen to the warnings of the scientists," pointing to the Covid-19 pandemic as "an example of gloomy scientists being proved right."

"We still cling with parts of our minds to the infantile belief that the world was made for our gratification and pleasure," he said. "And we combine this narcissism with an assumption of our own immortality." "We believe that someone else will clear up the mess, because that is what someone else has always done," he added. "We trash our habitats, again and again, with the inductive reasoning that we've gotten away with it so far, and therefore, we'll get away with it again. "My friends, the adolescence of humanity is coming to an end and must come to an end."

And quite right too, but are we too late, ladies and gentlemen, ecosystems around the world are collapsing, animals are dying at an unprecedented rate, crops are failing, our oceans are dying and our vegetation is burning.