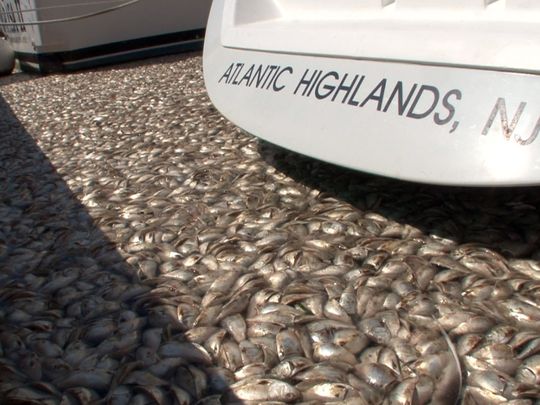 Dead peanut bunker float of the surface of Raritan Bay on the west side of Dock 5 at the Atlantic Highlands marina Monday morning, August 29, 2016. (Photo: THOMAS P. COSTELLO)

Last week The Big Wobble posted about millions of "salt water fish" found dead in a "fresh water creek" in Jersey, US
Local people who have lived there for years claimed they had never seen anything like it before.
You can read the post here.
Well it turns out this incident was just the tip of the ice berg, more fish are washing up dead in New Jersey waters.
App.com reports, for the second time in less than a week, thousands of small bait fish called peanut bunker have washed up dead along the Jersey Shore.
The first time was Tuesday in Keansburg on the northern shore of Monmouth County when millions of peanut bunker died and the second time was Saturday in Little Egg Harbor Township on the southern shore of Ocean County, a geodesic distance apart of 65 miles.
A conservative guess of 20,000 of the little fish were said to be dead.
Once again the cause of death is believed to be due to low concentrations of dissolved oxygen in the water, said Bob Considine, a DEP spokesman.
The  next day the latest in a series of fish kills throughout the Jersey Shore was reported when thousands of dead fish in a marina in Atlantic Highlands washed up dead on Sunday.
Blake Deakin recorded aerial footage of at the Atlantic Highlands marina, where thousands of what appeared to be dead peanut bunker floated lifeless around moored boats.
"I came across it (Sunday) morning," said the 34-year-old Atlantic Highlands resident.
"It was starting to smell pretty bad. It got noticeably worse over the course of the day."
Once again the cause of death is believed to be due to low concentrations of dissolved oxygen in the water.
On the same day a few miles further north authorities reported thousands of dead bunker fish washed up on shore on Long Island.
Huntington Town officials told Newsday some 11,000 bunker fish entered Mill Pond in Centerport last week and became trapped after the tide went out.
A town spokesman called it a natural occurrence that happens this time of year.
He says it’s the largest fish kill in the town since a mass die-off in Cold Spring Harbor 30 years ago. A Department of Environmental Conversation says the exact cause of the die-off is unclear.
But he says such events occur in warmer months when oxygen levels are low and the energy used by fish increases.
Last week, thousands of dead mussels came ashore in Jamesport, Long Island, probably due to this summer’s high temperatures.

"This is our Deep Water Horizon!" Florida's Atlantic coast a state of emergency as massive algae blooms attack North American waters
at August 30, 2016