The Opening of the Abyss: Huge sinkhole opens up in downtown Fukuoka, Japan 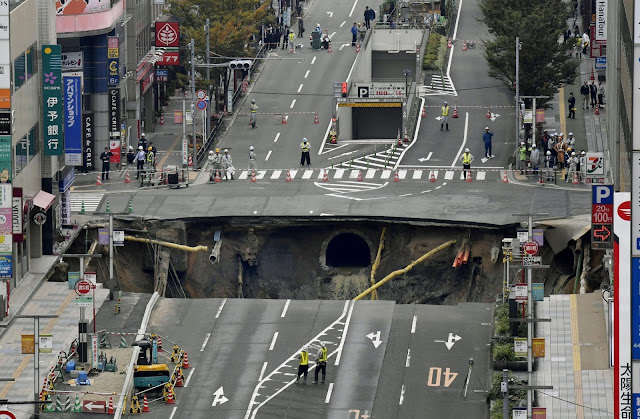 Photo The Japan Times
A huge sinkhole opened up beneath a major road in downtown Fukuoka on Tuesday morning, disrupting traffic, power supplies and banking systems, with local authorities evacuating nearby areas for fear of more cave-ins.
The police and the city office said they have yet to receive any injury reports.
The site is around the area where construction work is under way to extend the city subway system's Nanakuma Line.
The police and the city are investigating to determine if the sinkhole was caused by the work.
The police are blocking nearby areas and calling on people in buildings near the accident site to evacuate the area.
The road apparently caved in around 5:15 a.m. at an intersection near JR Hakata Station in the capital of the prefecture, the city office said.
TV footage showed the hole filled with water from underground channels.
The city evacuated buildings including several offices near the site at 9:45 a.m., saying there were signs the cave-in could cause buildings to collapse.
Police also told nearby offices and households not to use gas, fearing gas leaks.
The Bank of Fukuoka said its online systems appeared to have been disrupted by the accident. Fukuoka airport also temporarily experienced blackouts, forcing ticket machines to stop working briefly.
As of 10 a.m., the sinkhole had expanded to 30 meters long, 27 meters wide and 15 meters deep. Some 800 households were affected by blackouts early in the morning, but power was restored gradually, reducing the number of affected households to about 170 as of 9:20 a.m., according to Kyushu Electric Power Co.
"When I came to the office, police instructed us to get out of the building.
It seems like I need to stay at home for now," said Tsuyoshi Ito, 48, who works near the accident site. Another person who was in a nearby building said: "The lights suddenly went out and there was a big heavy sound.
When I went out, there was a huge hole."
In the past few years, there have been cases in which underground construction work has caused roads to cave in.


Home page
Related
Car wash septic tanks emerge as radiation threat in Fukushima: Amount of polluted sludge is estimated at several thousands of tons.
A mag 5.3 earthquake shakes central Oklahoma: Significant damage and a massive gas leak...
Leaked Army video shows 'near' future of urban hellscapes
Tension building: Iran bullying US in the Persion Gulf N Korea claim sanctions laughable and Al-Shabaab terorrists flood Mexican border
Tension building: S.Korea unveils plan to remove N. Korean capital Pyongyang from the map with tactical nuclear weapons
Tension building! North Korea claims it's fifth nuclear test while students are being taught “doom” and end of the world in schools
UN Supplying migrants with a document on how to break the law in Europe which led to 21 being attacked on a train in Germany and the death of a young Swedish nurse
Tension building: Czechs and Hungarians call for European army: Germany wants compulsory national service: US backed Turkey invades Russian backed Syria
The Battle of Gog and Magog? Russia Iran and Turkey come together North Korea prepares for the "end" and German's are told to stock up for disaster!
at November 08, 2016