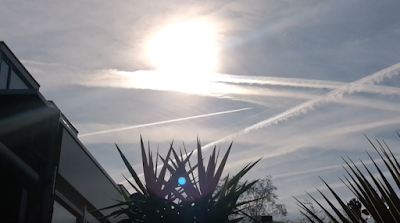 Hi Gary and readers of TBW!
The link below is the first one of its kind that I have seen that actually admits "it" ( the sky spraying) has begun!
It's official now but no public awareness until NBC or CBS or fox reports it, right!? Well, it's right here. . . Releasing Chemicals Into the Stratosphere has begun!
Well not really, it began about 70 years ago and now it is a daily routine, globally, but the liars who are behind this sinister activity have to start fessing up with some kind of explanation of why there are planes spraying white lines all over our skies! It's getting kinda noticeable.

Friday, 23 December 2022 Once-in-a-generation -70F bomb cyclone lashes the US with temps rarely seen in the US before and is colder than MARS! The Bomb cyclone is so cold it can cause frostbite in minutes: Almost 10,000 flights cancelled already and hundreds of thousands are expected to be without power! 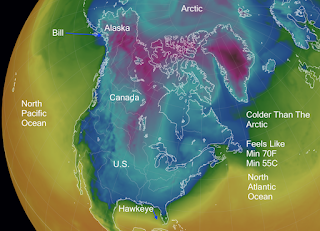 Meteorologists say the winter storm could become a "bomb cyclone" by Friday. Bomb cyclone is a term given to an explosive storm that intensifies rapidly, with its central air pressure dropping by at least 24 millibars in 24 hours.

With a distance of almost 4,000 miles (almost 6,500 km) between them, Bill Laughing-Bear in Alaska, and Hawkey in South West Florida are both about to "celebrate" the coldest Christmas in 40 years.

Hi Gary! Maybe you have heard about this weather forecast coming our way....? ("I surely have Hawkeye!") This side of the aftermath is troubling with food already in crisis mode! It just never stops does it!? I guess it won't... Anyway, I just wrote you this concern due to what happen in T[exas]. (Hawkey predicted this incredible coldwave would hit Texas months ago).

Monday, 14 November 2022 An Update From Florida, Hawkeye Survives Two Devastating Hurricanes In A Month: I know now the sea will not spare us. The reason we are so demolished here from that hurricane is because of the 15 ft storm surge flooding AND because that storm stayed on top of us with 150 mph winds for just over 24 straight hours. 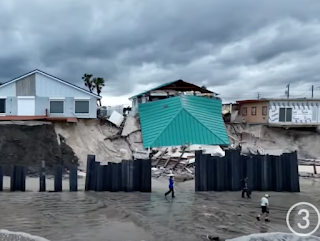 Hi Gary and readers of TBW

Well, I made it through the hurricane Nicole storm a few days ago! It made landfall on the east coast near Vero Beach and my area experienced tropical storm weather, 30 mph winds and lots more rain but no storm surge this time for us. The East coast had a [surging] flood even [though] Nicole was only a cat 1 hurricane with 75 - 85 mph winds.

The link I attached has a few really good videos to see that east coast flood from the Atlantic Ocean swallowing their coast up and you will see more of what I'm going through here in the never-ending aftermath of these storms. I thought of you to send this to because you had asked me about why the flimsy construction...[These] videos show that these storms are toppling more than just the flimsy construction! You will see that and it will help you understand me better as I will talk about the future and as I have talked about things regarding the weather makers and all that is related to them.

Tuesday, 8 November 2022 A letter from Florida! Just a month after Hurricane Ian destroyed everything Hawkeye owned, Hurricane Nicole is scheduled to hit the southeast coast of FL and go straight across to my west side before curving north to move up the rest of the state 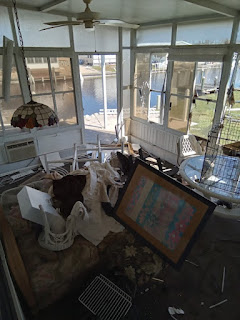 Hawkey has kindly written to TBW again today in the middle of her massive cleanup operation after Hurricane Ian landed in her backyard last month destroying all her possessions and house. She informs us, another one is coming fast! Hurricane Nicole is also on its way toward her area of Florida State to cause more destruction in the coming days.

She is actually commenting on a post I wrote here

That is the said timeline of how the covid mantra played out and quite a bit of work putting it all together I'm sure! Good job Gary! The facts...but are they really the facts I wonder? Bioweapons in Ukraine? Marco Rubio my FL state rep. asked....oh, like he doesn't know! There are so many bio labs worldwide, another said fact that has been released since covid, that it seems suspicious to me to blame Ukraine as the culprit, just as blaming Russia for causing supply chain issues (etc.) for invading Ukraine is.

Monday, 17 October 2022 Exclusive! A letter from Florida: Hawkeye, Tells Her Own Story How She And Her Husband Survived Hurricane Ian As It Literally Made Landfall On Her Property! Ian Was The Deadliest Hurricane To Hit The State Of Florida Since The 1935 Labor Day Hurricane

Hurricane Ian made landfall on Pine Island Florida, with credit to NASA.

On the 26 of September 2022 at 09:35, TBW received a message from Hawkeye, one of the main contributors to this blog. The incredibly powerful, Hurricane Ian, category 4, was about to make landfall on Pine Island, southwestern Florida where Hawkeye lives—And as ever she was remonstrating at what she calls the weather makers!

It would be 17 days before we heard another word from Hawkeye. Hawkeye usually contributes and writes to TBW almost every day, ironically delivering a diatribe or rant on government weather modification, especially their power to control the path of a hurricane, and the ability to control its speed, only this time she would become a massive player in the deadliest hurricane to hit the state of Florida since 1935 Labor Day hurricane. As the drama unfolded, not surprisingly, Hawkeye went off the radar, we all feared for the worst. . .

Saturday, 22 October 2022 Here is the latest update from Hawkeye after she survived Hurricane Ian's landfall, the deadliest hurricane to hit Florida State since 1935. She amusingly appears to be more worried about her pets than she is about herself! 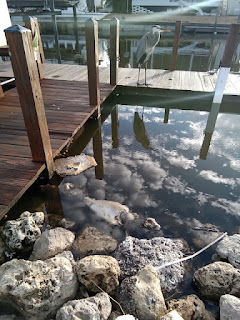 Here is the latest update from Hawkeye after she survived Hurricane Ian's landfall, the deadliest hurricane to hit Florida State since 1935. The Hurricane made landfall on Pine Island where Hawkeye lives, devasting everything around her.
It is so pleasing to hear from Hawkeye who disappeared from TBW radar three weeks after the hurricane struck in September.
She amusingly appears to be more worried about her pets than she is about herself!
[Dear] Gary, [and readers of TBW]
All of the short videos I wanted to send you are too big for my tablet so can't send them right now. I will try to find another way to get them to you.

Left. Meantime, here is one photo of dead fish in the Canal from gas/oil etc that went into the waterways. The birds remaining are starving and coming to occupied homes looking for food. This bird frequents my yard, I named him Bluebird. He is a Great Blue Heron.

Sunday, 23 October 2022 More exclusive pictures and an update on Hawkeye's situation after Hurricane Ian landed in her backyard last month! She is, as you might have anticipated remarkably upbeat about her desperate situation! 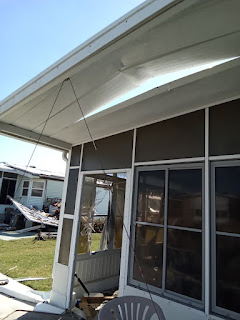 Hawkey's devastated house and loved-up ducks.
Here are a few more photos showing my wild ducks and the damaged landscape.
When something like I have been through happens I think to myself God has allowed it to force big changes in our life, changes that one would not have done otherwise. For our own good. In the blink of an eye, your whole world is changed and this causes one of two reactions....you either turn to God or you get angry and turn against Him. So that is part of the reason. He allows things that are seemingly very negative. There is a blessing in there someplace and something really good will come from it. I know that in my heart but while it is occurring there are days you feel like screaming out, why Lord, why!?
I do care so much for my pets and the wildlife. I can not bear to see any beautiful innocent creature of God suffering from man's hand! The animals seem to know this of me because they come to me. Of course, I will help them if only with a clean drink of water. They look so happy to find it in the yard and with such an enormous amount of debris scattered throughout the ground, the birds do not want to wonder as they normally would. The ducks I care for will not leave my yard since they showed back up after the storm.