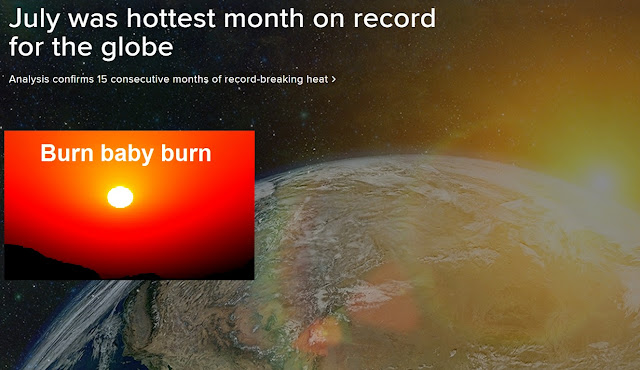 If June was unprecedented and undeniable with it becoming the 14 consecutive month of record heat for the globe, July chips in with the 15th consecutive month of record heat as the planet buckles from planet change...
As heat waves, fires, floods, storms, drought continued to hit the headlines in July, Kuwait tied the world’s highest known temperature at 129.2 degrees (54 Celsius) at the end of July, while one month's rain fell in two hours and  destroyed Ellicott City maine street in Maryland killing two, along with 40 dead from lightning strikes in Odisha, India, 50 people dead or missing from landslides in Nepal.
More than one years rain fell in less than a day in China, killing 225 with a further 225,000 trapped.
A deadly Texas heat wave killed four, while heat waves in Europe climbed above 40C, 105F.
A new record, as ten thousand lightning flashes lit up Hong Kong's night sky in July, hundreds killed in torrential rains in India.. the records just kept tumbling.


July 2016 was 1.57 degrees F above the 20th-century average, breaking last year’s record for the warmest July on record by 0.11 degrees F, according to scientists from NOAA’s National Centers for Environmental Information.
This was the 15th month in a row to break a monthly heat record, surpassing July 2015 as the warmest month ever on record.
Records date back 137 years to 1880.
For the year to date, the average global temperature was 1.85 degrees F above the 20th-century average.
This was the highest temperature for this period, breaking the previous record set in 2015 by 0.34 degrees F.

Click to enlarge
Some more notable findings around the world include:
The globally averaged sea surface temperature was record high for July and the year to date (January–July).
The globally averaged land surface temperature tied with 1998 as record high for July and record high for the year to date.
Near-record-warm continents: Asia had its second warmest July; Oceania its fourth, North America its fifth, and Africa and Europe their seventh.
The average Arctic sea ice extent for July was 16.9 percent below the 1981–2010 average.
This was the third smallest July extent since records began in 1979.
The average Antarctic sea ice extent for July was 0.2 percent above the 1981–2010 average, marking the smallest July Antarctic sea ice extent since 2011 and the 19th smallest on record.

Parts of Europe on alert as a heatwave moves in with some parts hitting 40C (104F)
Posted by Gary Walton at 11:09 am