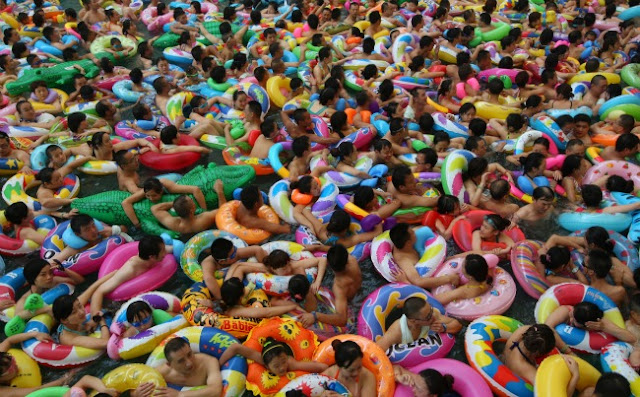 
Shanghai was in the grip of an unprecedented heat wave until last week, with daily temperatures hovering above 35 degrees Celsius for 11 days in a row by July 30.
When braving such sizzling heat on an unshaded stretch of pavement, it might elude us that Shanghai is both a "promised land" for migrants, and a magnet for expatriates and tourists.
One senior colleague who is a Shanghai native says it was not so hot when he was young.
The temperature rarely exceeded 34 degrees, according to him, and on summer evenings he would go to a road near People's Square and lie down to exchange gossip with neighbors.
The occasional motor vehicle whirring past would bring a welcome gust of air in its wake.
This is not merely nostalgia for the past.
There is evidence that Shanghai has been getting hotter.
According to one statistic, from 1873 to July 2016, there were 11 days when the daily high exceeded 40 degrees.
Except for two instances in 1934, these temperatures were all registered after 2008, with last week alone accounting for two instances.
An academic paper I managed to find online concludes that since the 1980s the number of "extremely hot" days recorded in downtown Shanghai has increased markedly compared with suburban areas.
So far, we seem indifferent to the rising heat, especially as technology enables us to cope simply by consuming more energy.
On July 28, the city's electricity consumption reached a record new high of 31,384 megawatts, up 5 percent over last year - but do not take this as a warning.
Local authorities were quick with assurances that the city had enough power to keep running.
Unlike in previous years when brownouts or blackouts were sometimes introduced, there seems to be no such worries this year; possibly as an unexpected boon of economic rebalancing.
At night, as usual, the exterior of some landmarks are illuminated in dazzling ornamental light.
The heat affects some people more than others.
There is a world of difference between those who are exposed to outdoor heat for long hours, and those who cast an occasional glance outside from an air-conditioned office.
Thus I doubt if green policies conceived in an air-conditioned room can hope to address climate change with the high seriousness the issue deserves.
Last Friday morning, after getting off the bus, I had to traverse a lane in a park, and I was somewhat aghast to find a middle-aged cleaner diligently rubbing the surface of a lamppost in the suffocating morning heat.
Fifteen minutes later, when I went into my office lobby, I saw another cleaner sweeping the floor.
In days like this, there are broadly speaking two professions, those pursued indoors and those practiced outdoors.
Outdoor workers also include the delivery men who perennially scuttle to and fro on the roads.
On Saturday alone, four delivery men delivered to my home four parcels ordered by my wife the previous day.
These parcels included such trifles as sunscreen, lip balm and hats.