Photo NOAA
The Northern Hemisphere is on fire...
Yesterday Europe baked in record temperatures for July, with France Holland Belgium and Spain pushing 40C, (104F), in my back garden in North Holland in the shade yesterday peaked at 39C (102.5), which beats the previous record of 38C.
Even the UK had temperatures well into the 30's.
Four people were reported dead from the heat in Texas this week as America has suffered horrendous weather this summer, with record heat, flooding, tornado's mega storms and wildfires.
So its not surprising that NOAA has announced, June marks 14 consecutive months of record heat for the globe.
Their report claims, persistent heat on land and in the sea this June shattered records, yet again. June 2016 was 1.62 degrees F above the 20th century average, breaking last year’s record for the warmest June on record by 0.04 degrees F, according to scientists from NOAA’s National Centers for Environmental Information.
NOAA’s global temperature records dates back 137 years to 1880.
For the year to date, the average global temperature was 1.89 degrees F above the 20th century average.
This was the highest temperature for this period, surpassing the previous record set in 2015 by 0.36 degrees F. 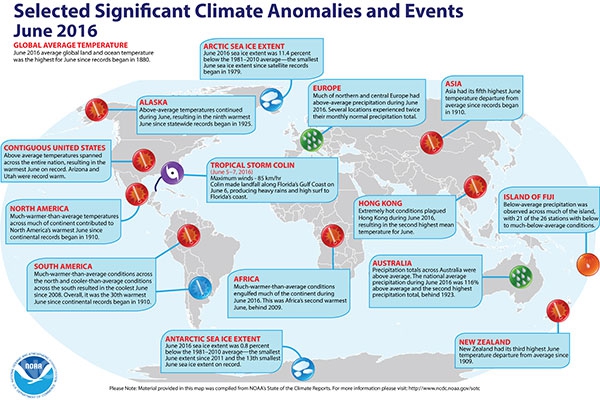 Click on image to enlarge
Some notable events around the world include:
The globally averaged sea surface temperature was record high for June and the year-to-date (January–June).
The globally averaged land temperature tied as record high for June, making it the 34th consecutive June with temperatures above the 20th century average.
The year-to-date (January–June) average temperature was also record high.
Much warmer-than-average temperatures contributed to North America’s warmest June since continental records began in 1910.
Much warmer-than-average conditions engulfed most of Africa resulting in the second warmest June since 1910 for the continent.
The average Arctic sea ice extent for June was 11.4 percent below the 1981–2010 average.
This was the smallest June extent since records began in 1979.
The average Antarctic sea ice extent for June was 40,000 square miles below the 1981–2010 average, marking the smallest June Antarctic sea ice extent since 2011 and the 13th smallest on record.