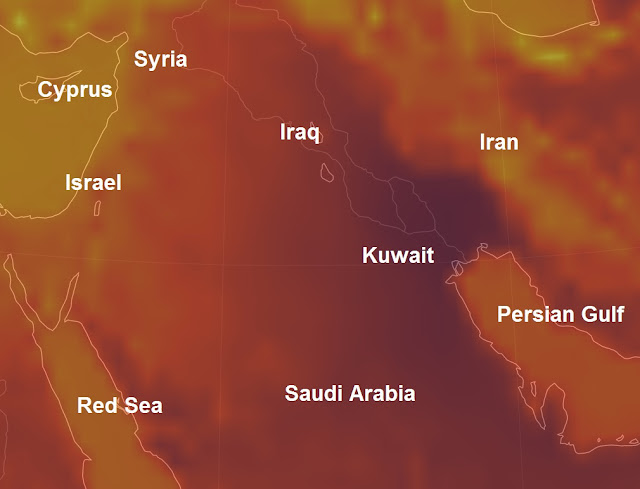 Earthwindmap
This week Europe is baking in record temperatures for July, with France, Holland, Belgium and Spain pushing 40C, (104F), in North Holland in my back garden yesterday the temperature in the shade peaked at 39C (102.5), which beats the previous record of 38C.
Even the UK had temperatures well into the 30's.
The US has feared no better, so spare a thought for the folks in Mitribah, Kuwait where temperatures surged Thursday to a blistering 129.2 degrees (54 Celsius).
And on Friday in Basra, Iraq, the mercury soared to 129.0 degrees (53.9 Celsius).
If confirmed, these incredible measurements would represent the two hottest temperatures ever recorded in the Eastern Hemisphere, according to Weather Underground meteorologist Jeff Masters and weather historian Christopher Burt, who broke the news.
It’s also possible that Mitribah’s 129.2-degree reading matches the hottest ever reliably measured temperature anywhere in the world.
Both Mitribah and Basra’s readings are likely the highest ever recorded outside of Death Valley, Calif.
Death Valley currently holds the record for the world’s hottest temperature of 134.1 degrees (56.7 Celsius), set July 10, 1913.
But Weather Underground’s Burt does not believe it is a credible measurement:
“The record has been scrutinized perhaps more than any other in the United States,” Burt wrote.
“I don’t have much more to add to the debate aside from my belief it is most likely not a valid reading when one looks at all the evidence.”
If you discard the Death Valley record from 1913, the 129.2-degree reading from Mitribah Thursday would tie the world’s highest known temperature, also observed in Death Valley on June 30, 2013, and in Tirat Tsvi, Israel, on June 22, 1942.
But Masters says the Israeli measurement is controversial.