Battered by a marine heatwave, Kodiak’s cod fishermen may not be fishing in the Gulf for much longer. Everything changed with the emergence of a massive marine heatwave across the Pacific, commonly known as “the blob.” Between 2014 and 2016, surface ocean temperatures rose 4 to 5 degrees Fahrenheit. After that, cod started to disappear. From the last peak in 2014, the level of mature, spawning cod crashed by more than half in the Gulf, according to stock assessment data — 113,830 metric tons in 2014 to 46,080 metric tons in 2017. They’re now below the federal threshold that protects cod as a food source for endangered Stellar sea lions. As soon as the population dips below that line, the fishery closes. The whole federal cod fishery in the Gulf will most likely be shut down for the season in January.
Climate Crisis: Sydney and Adelaide blanketed by smoke: Record rain hits Las Vegas: Mysterious disease killing American beeches: Propane shortages rock midwest states

Code red: Fire emergencies, dust storm, heatwave, smoke haze in SA, Victoria, NSW and Queensland as bushfire danger continues. Melbourne has experienced its hottest November day in more than a century as the state battled strong winds and up to 60 bushfires that destroyed at least two properties. Bureau of Meteorology spokesman Kevin Parkyn said the thermometer hit 40.9, a couple of degrees higher than the forecasted maximum, in Melbourne on Thursday the last time the mercury crept that high November in 1894. More than 80,000 Victorian households are currently without power as extreme weather brings catastrophic fire conditions to the state, schools are closed and strong winds have triggered storms blanketing cities in dust
Climate Crisis: Aus horror of animals screaming in pain after bushfires: Once in a lifetime heat blast set to hit Aus: 2nd-hottest October and year to date: Worst deforestation in a decade Brazil

South Australia bushfires flare amid catastrophic conditions. The SA bushfires are burning out of control as conditions deteriorate with residents told to take shelter. Beekeepers who were traumatised are being counselled after hearing animals screaming in pain after bushfires. NSW Apiarists Association president Stephen Targett said the situation in north-eastern NSW was "truly devastating" to beekeepers and extremely traumatic. The screaming animals, the animals that are in pain, that are crying out in the forest, it's absolutely horrific," Mr Targett said. "One beekeeper employs some young people and it has really traumatised them. Counselling has been arranged for these young beekeepers who went into the forest and they won't allow them back into the forest for a period of time
Climate Crisis: Now California jumps from record heat to snowfall: Canada's farmers pushed to the brink: Food prices to rise in the UK as floods ruin crops: Record snow Europe 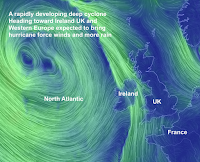 A rapidly developing deep cyclone took place over the Labrador Sea and south of Greenland. Hurricane-force winds have introduced a violent windstorm, resulting in significant wave height in excess of 18 meters as it has been analyzed by NOAA OPC forecasters, Severe Weather Europe

Sydney blanketed by smoke from NSW bushfires 5 million people in Sydney woke up to a city shrouded in smoke on Tuesday, as scores of bushfires are still raging across the region and are expected to worsen. 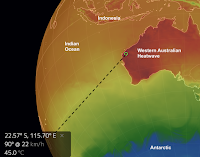 A weekend of intense heat in Western Australia has seen 36 locations, including Perth, record their warmest November day on record and now the hot air mass is on its way to the eastern states.


Climate Crisis: Earliest cold ever in the warmest year ever: Canada coldest place in the world next week: Cricket ball-sized hail hit the Sunshine Coast as wildfires blaze 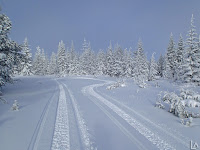 loomisadventures.com
With the Arctic blast of early November 2019 being officially put into the record book, let us look back at the thousand or so all-time cold records smashing and eclipsing the oldest records we have in the US and Canada. Even the Washington Post calling the event unprecedented coldest earliest ever recorded for this early in the year, which says a lot about how intense this event was. The UK and Nordic countries also setting dozens of all-time cold records with record snow accumulations as well. The question, how do you think this will affect food pricing in the future? which the video below.
Climate Crisis: Millions of acres canola buried in Canada: New drought hits California: Fears of more flooding in England: More Aus bushfires: Snow in the Arabian Gulf

Heavy snow and rain during harvest on the Canadian Prairies have left several million acres of canola buried until spring, the latest blow in a miserable year that may compound farmer problems into 2020. Canola is renowned as Canada’s most profitable crop, exported to China, Japan and Mexico to make vegetable oil and animal feed. This year will be remembered as the “harvest from hell,” said farmer John Guelly, chairman of the Alberta Canola industry group.