Climate Crisis: Aus horror of animals screaming in pain after bushfires: Once in a lifetime heat blast set to hit Aus: 2nd-hottest October and year to date: Worst deforestation in a decade Brazil 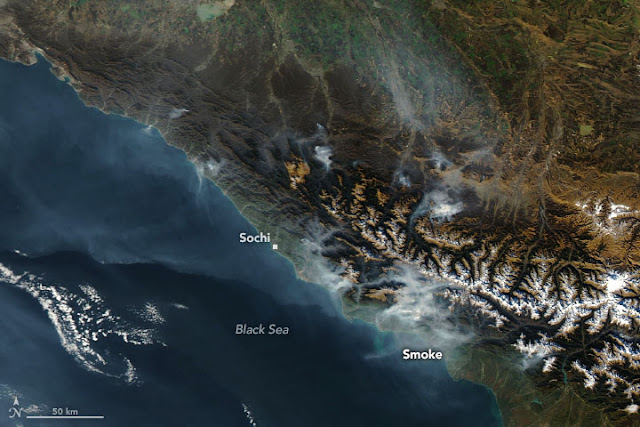 Moderate Resolution Imaging Spectroradiometer (MODIS) on NASA’s Aqua satellite acquired this natural-colour image of smoke plumes around the Caucasus Mountains and the Black Sea coast of Russia, see photo above.

South Australia bushfires flare amid catastrophic conditions. The SA bushfires are burning out of control as conditions deteriorate with residents told to take shelter. Beekeepers who were traumatised are being counselled after hearing animals screaming in pain after bushfires. NSW Apiarists Association president Stephen Targett said the situation in north-eastern NSW was "truly devastating" to beekeepers and extremely traumatic. The screaming animals, the animals that are in pain, that are crying out in the forest, it's absolutely horrific," Mr Targett said. "One beekeeper employs some young people and it has really traumatised them. Counselling has been arranged for these young beekeepers who went into the forest and they won't allow them back into the forest for a period of time, reports ABC News

A once in a lifetime heat blast set to hit Australia with a 40 deg C (105 deg F) scorcher across swathes of the nation with 125-year-old temperature records set to fall today. The heatwave is set to sweep across Australia, leaving SA, QLD and VIC sweltering, breaking a 125-year temperature record. More than 100 schools in South Australia will close for 'catastrophic' fire danger. QLD firefighters face testing weeks as no significant rain is expected until January Daily Mail 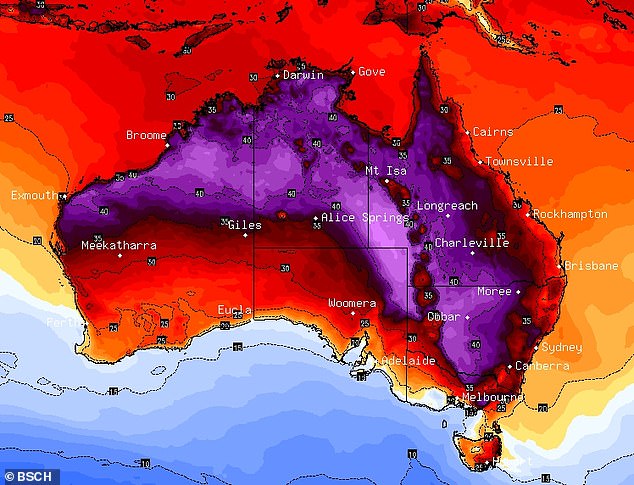 The toxic red tide algae bloom which killed an unprecedented amount of marine life last year has returned. Florida declared a state of emergency last year during a 16-month red tide that killed untold tons of fish and nearly 150 dolphins. Now the red tide is back, and residents are worried they may again find their beaches covered in stinking piles of rotting sea life for months to come, reports Changing America America's northernmost town won't see the Sun until January, but it's on pace for a record warm year.
Through Nov. 18, Utqiaġvik (formerly Barrow) has had 147 straight days of warmer than average temperatures, according to data from the National Weather Service in Fairbanks, an extraordinarily long warm streak. Its last cooler than an average day was June 24. Utqiaġvik had a record warm March, its record earliest in season-high in the 70s (73 degrees on June 20), a record warm July and September. Weather Channel 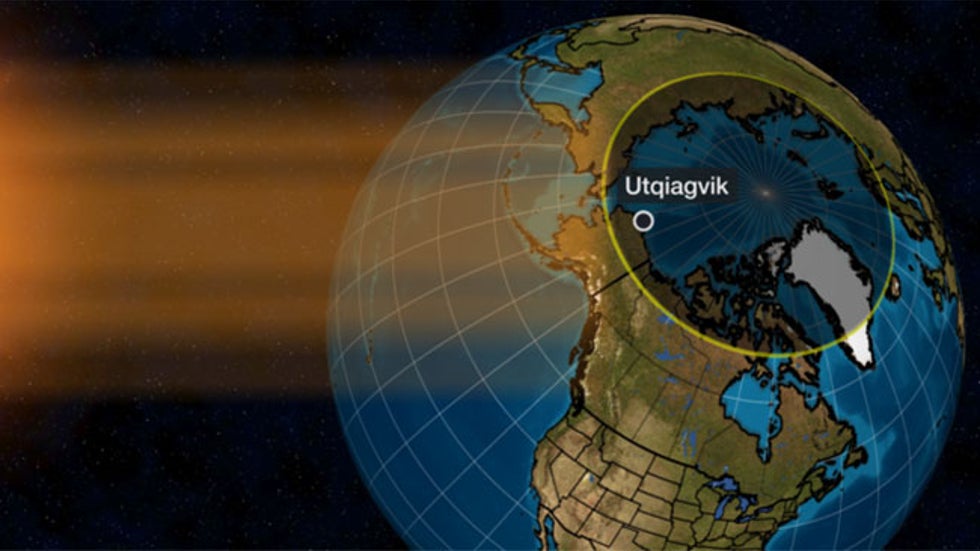 Four people died in as temperatures dropped to -10 deg C, (14 deg F) in parts of the UK after three months of disastrous flooding. Daily Mail

More severe weather is affecting parts of northern Italy, with snowfall and avalanches in mountainous areas and flooding rivers in Emilia-Romagna Region and neighbouring Tuscany. Italy’s fire service Vigili del Fuoco said it had carried out 8,000 interventions during the past week due to bad weather, including 500 in 36 hours to 18 November in Emilia-Romagna and Tuscany. Floodlist 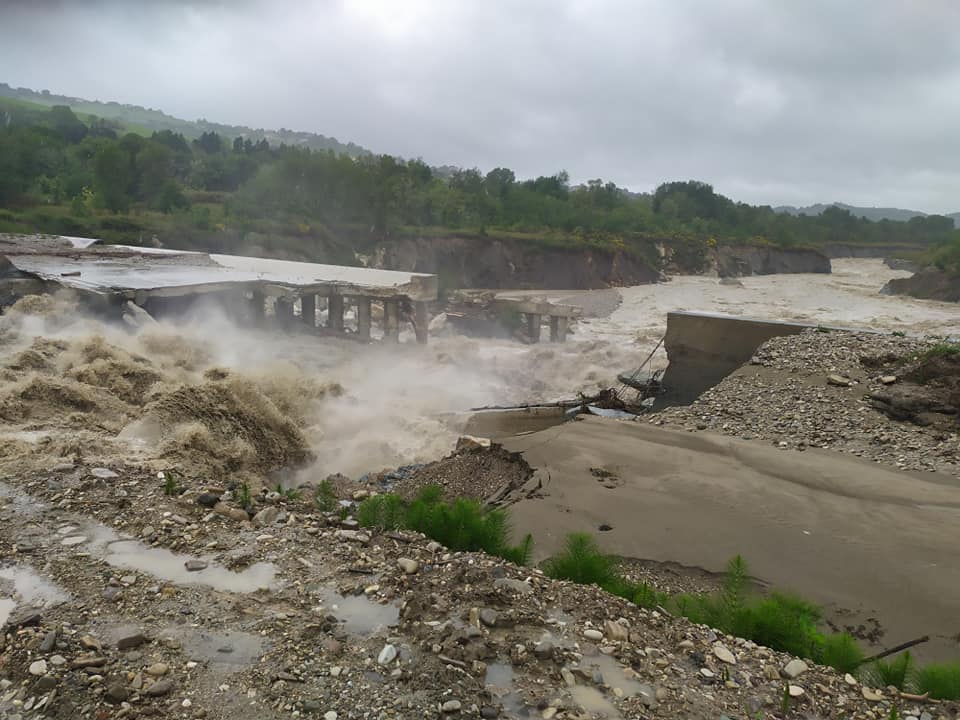 Devastating flooding and landslides in Italy

Istanbul heatwave shows the need for urgent climate action in Turkey. Istanbul has had the hottest November in 40 years, and with average temperatures in Turkey rising the government must take urgent action to address climate change, the Cumhuriyet newspaper quoted a representative of environmental group Greenpeace as saying. After weeks of unseasonably hot and sunny days, the average temperature in Istanbul this month has been 21.7 degrees Celsius, 10 degrees higher than the average for the month since 1981 reports Ahval

Chile faces a “very difficult” season of wildfires because of high temperatures, persistent drought and an increase in arson, Agriculture Minister Antonio Walker said on Tuesday, adding to the woes of a country damaged by violent socio-economic protests in the past month. Already, approximately 1,000 fires have been registered, principally in the central region around the port of Valparaíso, compared to 491 in the whole of last year, according to figures from the National Forestry Corporation (CONAF) Reuters

(UN OCHA) reports that flooding has affected thousands of people in the provinces of Haut-Uélé and Tshopo in the north of Democratic Republic of the Congo (DRC). Meanwhile, ongoing floods in the neighbouring Central African Republic have destroyed 10,000 homes and affected almost 60,000 people, according to the Norwegian Refugee Council (NRC).  Floodlist


Nigeria, the worst flooding in 7 Years hits Borno and Adamawa.  Flooding has once again hit areas of northeast Nigeria, severely affecting thousands of people in Borno State. Meanwhile the flood situation in neighbouring Adamawa state continues, with almost 20,000 people displaced. The UN says the floods in Borno and Adamawa state are the worst in seven years. About 300,000 people have been affected so far this year, which is five times more than expected. Floodlist

The globe had its 2nd-hottest October and year to date on record. The Arctic sea ice coverage also shrank to a record low last month. Planet Earth continued to sweat in unrelenting heat last month making October 2019 the second-hottest October recorded, just behind 2015. It was also the second-hottest year to date (January through October) on record for the globe. Continuing its melting trend, Arctic sea ice coverage shrank to its smallest size yet for October. NOAA

Climate change could directly cost the world economy $7.9 trillion by mid-century as increased drought, flooding and crop failures hamper growth and threaten infrastructure, the new analysis showed Wednesday. The Economist Intelligence Unit's (EIU) Climate Change Resilience Index measured the preparedness of the world's 82 largest economies and found that based on current trends the fallout of warming temperatures would shave off three per cent of global GDP by 2050. rfi